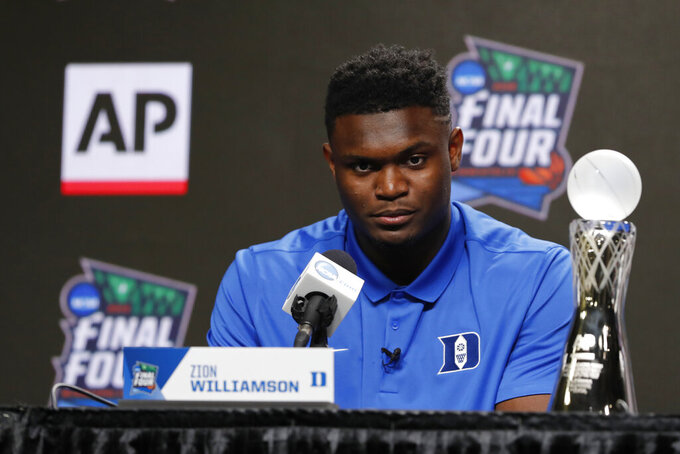 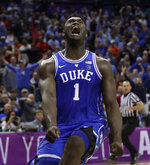 MINNEAPOLIS (AP) — Just about everything Zion Williamson did at Duke created a highlight or headline in a spectacle of a season.

The open-court moves more nimble than his 6-foot-7, 285-pound frame should allow.

Even the freak occurrence of one of his feet tearing through its shoe in a fall to the court.

Handling all that attention became maybe the biggest lesson for the freshman, who quickly became the face of college basketball and the game's biggest star in years — then fittingly finished as The Associated Press men's player of the year.

"I was comfortable with it because you don't really have a choice," Williamson said in an interview with the AP earlier this week. "I think if you try to force it out, then it's going to bother you. ... My mom just told me to look at it as a lot of kids would wish to be in my position, so if it does bother me, I just think about it like that."

Williamson had hoped to be in Minneapolis preparing for Saturday's national semifinals like Hunter and Winston. But the Blue Devils fell to Winston's Spartans in the Elite Eight as the top overall seed.

"I was just telling (teammates) don't let nobody tell you this season was a disappointment, because people have got to understand it's March Madness," he said, adding: "I mean, winning the championship is not a cakewalk."

In a likely one-year college stop for a possible top overall NBA draft pick, the 18-year-old Williamson averaged 22.6 points and 8.9 rebounds while ranking second nationally by shooting 68%. He also ranked among the Atlantic Coast Conference leaders in steals (2.12) and blocks (1.79).

Williamson's play was marked by breathtaking athleticism to go by, through and over anyone to get the ball (look at his personal-favorite 360-degree dunk against Clemson or his rapid-closeout swat of Hunter's shot at Virginia for proof).

There was the charisma, too. He projected a self-assured ease amid the crush of postgame interviews, even routinely having walk-on Mike Buckmire join him as a wingman as though bringing his teammate into his unique orbit.

"It's been remarkable what he's done," said North Carolina coach Roy Williams, who recruited Williamson. "There hasn't been many guys like that to come down the road. So the attention he's gotten, I think he'd deserved. ... He's driven a different ship."

Williamson missed nearly six full games after injuring his knee in the fall, which had his left foot sticking through the side of his Paul George signature shoe from Nike. The bizarre image wounded Nike's day-after stock price and had some arguing that he shouldn't return to protect his pro stock.

That was never an option for Williamson. He returned in the ACC Tournament sporting a reinforced pair of Kyrie Irving Nikes, which followed Nike representatives visiting Duke's campus to sort out what went wrong.

The unusual moments of stardom didn't stop there, either.

"Cars will be driving by (on campus) and I mean, they'll just stop," Williamson said with a chuckle. "In the middle of the road. And people will jump out of the car and get pictures. I'm looking at my watch, I have two minutes to get to class and my class is a five-minute walk. ... I'll look at them and they'll be so high, I'm like, 'Yeah, I got you, I'll take the picture."

He also frequently encountered Duke fans waiting near the practice gym for autographs.

"You've got 20 minutes before that clock starts for practice, you've got like 20 people outside," Williamson said. "You're like, 'I don't think I can do this.' So then it comes down to: do I say no? Or do I tell them to wait?

"I've been in a lot of situations. Sometimes they understood, other times they weren't so accepting of it. But I guess that's part of life."

Williamson said there's "obviously a high possibility" he enters the draft but he's not ready to make anything official as he enjoys being a college student a little longer with plans on taking summer classes toward a degree.

Williamson said he has no regrets, calling the season "the most fun I've ever had in my life."

"My mom would tell me, 'College is something you don't want to miss out on' because not only have I enjoyed the basketball side of coming to Duke, I've enjoyed being a student here just as much," Williamson said. "The relationships I've built with the students here — like talking to kids I guess people wouldn't picture me talking to, hanging out with them — it's bigger than basketball."