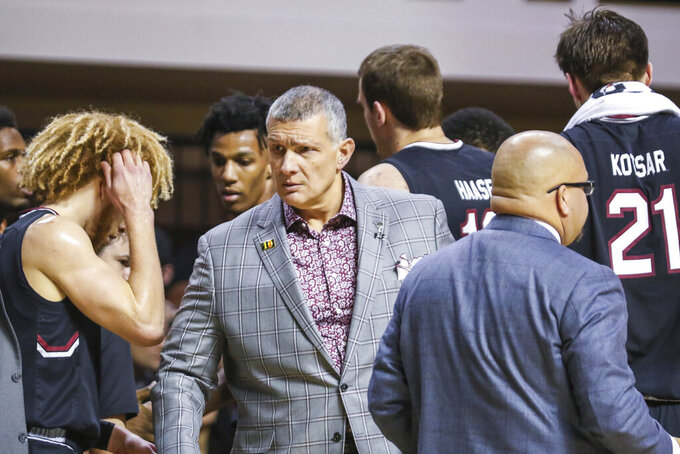 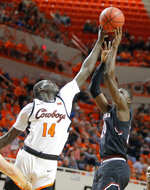 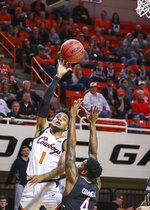 STILLWATER, Okla. (AP) — Down to just nine players after dismissing three from the team two weeks ago for disciplinary reasons, Oklahoma State has faded late in games recently and had lost three in a row.

Thomas Dziagwa matched a career high with 19 points, shooting 5 of 9 from 3-point range, to help lead Oklahoma State to a 74-70 victory over South Carolina in the SEC/Big 12 Challege on Saturday afternoon.

In a close battle that saw 14 lead changes in the second half alone, the Cowboys outscored the Gamecocks 12-7 over the last 5½ minutes to secure the win.

"I'm really proud of our players," said Oklahoma State coach Mike Boynton. "It's been a hell of a two weeks for them. Not just not playing the way we wanted and being in some close games and not being able to finish, but obviously all the other stuff off the court as well, so to see us respond the way we did. . We just competed for 40 minutes and we never let the rope go today."

"I think it was huge," Dziagwa said of the triumph. "When you see all the hard work come to fruition, it's a confidence booster. In the Big 12, every game is close, so we know that we've been in this position, and we have failed before, but today we did succeed and we'll have that in the back of our mind."

Chris Silva contributed 15 points and nine rebounds and A.J. Lawson scored 12 for South Carolina (10-9), which lost for just the second time in its last eight contests.

Gamecocks coach Frank Martin was frustrated by the way his team defended against Waters in particular, who shot 5 for 13 from the floor, including 3 for 7 on 3-pointers.

"We were bad. Scouting report says that he's going to shoot 3s from everywhere, so whenever we're in the zone, don't let him shoot the 3s," Martin said. "How many times did we stand there and watch him shoot? That kid never misses. I call that the 'wish defense.' That's when you say, 'I wish he misses.' You don't play (that way against) high-level guys that work their butts off."

It was a nice reversal for Oklahoma State, which was outscored 10-0 in the final five minutes of its 70-61 loss to Oklahoma on Wednesday.

This time, South Carolina went up 63-62 with 5:36 remaining on Silva's 10-foot jump shot, but a 12-4 run over the next five-plus minutes gave the Cowboys the victory. Waters made a key layup with 20 seconds to go to make it 72-67, and then sank two free throws with 5.6 seconds on the clock to seal it.

"You have to fail sometimes in these moments before you can learn how to have success," Boynton said. "And today's win was a lot of what happened on Wednesday. We came in and watched those few moments where the game kind of got away from us and the small plays that we didn't make. I thought our defense was really solid."

South Carolina: After shooting 45.1 percent and averaging 80.1 points per game over their last seven contests, the Gamecocks struggled a bit against Oklahoma State's pressuring defense, especially in the opening half. South Carolina shot 34.4 percent in the first (11 of 32), including two different 1-for-7 stretches, that helped the Gamecocks dig a 12-point hole at one point. South Carolina shot 42.9 percent (15 for 35) in the second half.

Oklahoma State: Among the three players cut two weeks ago was guard Michael Weathers, who averaged 9.2 points in 20.4 minutes per contest, but this time the Cowboys managed to avoid fatigue late in the second half, despite using just eight players. McGriff, who played all 40 minutes against Oklahoma, played 30, while freshman Duncan Demuth got seven minutes (after playing nine on Wednesday). Fellow freshman Luke Major, who didn't see the floor at all against Oklahoma and played just four minutes combined over the previous seven contests, got in for two.

It was an emotional afternoon for Boynton, who played four years at South Carolina from 2001-04 and served on the Gamecock coaching staff from 2008-13, including one season under Martin. Boynton played 125 career games for South Carolina, which still ranks seventh in program history, and finished his career in the top 10 in 3-pointers made with 129. "Obviously I went there, I know everybody on their staff, I know their families, my wife knows their wives," Boynton said. "You never really want to compete against people you know that well, because there are no ties in this game."

South Carolina didn't attempt a free throw at all in the first half and had just nine, making all of them, overall. Oklahoma State, meanwhile, was 23 for 29 from the stripe. . After edging the Gamecocks 20-19 in first-half rebounds, the Cowboys got outrebounded 23-14 in the second half.

South Carolina: The Gamecocks return home for a major challenge as they take on No. 1 Tennessee on Tuesday night.

Oklahoma State: The Cowboys enjoy a week off at home before facing Kansas State next Saturday.