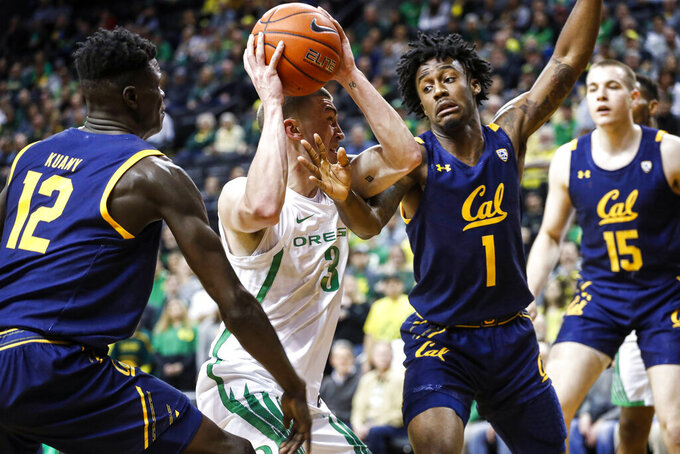 By scoring 21 consecutive points to pull away from California in the first half, the Ducks went on to win 90-56. It was their widest margin of victory in a Pac-12 game this season.

That sets up a home game Saturday against Stanford that could result in a share of the conference title, or possibly outright possession of the championship. The Ducks (23-7) moved back into a tie with UCLA for first place in the conference at 12-5 with the regular season ending Saturday. UCLA meets USC to conclude its season before Oregon hosts Stanford.

“It will be a big game Saturday night, we have to play real well,” Oregon coach Dana Altman said. “We are playing a team that really needs a win and we need a win to win a conference championship.

“It’s not like with our tradition that we can take that lightly. Everyone talks about March and the NCAA Tournament, but I still think conference titles mean a lot.”

Payton Pritchard led five Ducks in double figures with 20 points and passed out nine assists in Oregon’s 21st consecutive home victory, including all 16 home games this season. Pritchard shot 6 of 8 overall, including making all three of his 3-point attempts.

Oregon shot 63% from the field overall, including 71% (12 for 17) on 3s as Anthony Matthis added 17 points on 5 for 6 shooting from 3-point range. Will Richardson and Addison Patterson each had 13, and Shakur Juiston chipped in 10. Oregon had 18 assists with only eight turnovers, and a 32 -25 advantage in rebounds.

“A lot of good stats there,” Altman said. “I thought it was a really good effort.

“Everybody gave us a little something. If you can get eight or nine guys contributing at this time of year, that can make a real difference.”

Matt Bradley led the Bears (13-17, 7-10) with 15 points, and Grant Anticevich added 10. Cal shot 36% from the field and struggled to get into an offensive flow against Oregon’s pressure defense.

“I don’t want to take anything away from Oregon, they’ve got a great team,” Cal coach Mark Fox said. “They’re still playing for the championship, but I’d hoped to give them a better fight.

“We played poorly from top to bottom. ... We coached poorly.”

After trailing by as many as 28 points, Cal made a brief rally to get within 15 at 58-43 with 11 minutes remaining. But after a media timeout, Pritchard made two free throws, hit a 3-pointer from the corner that was followed by a 3 from Patterson and Oregon’s lead was back to 66-43, prompting Cal to use a timeout with 9:33 remaining.

Oregon never trailed, taking a quick 11-5 lead by making its first five field-goal attempts. The lead kept edging wider until the Ducks blew it open with 21 consecutive points for a 46-18 advantage with two minutes left in the opening half as Cal went five minutes without a point.

“I was disappointed in our approach to the game, but I want to give Oregon credit. They played very well,” Fox said. “The only thing I was surprised by was our very poor start to the game.”

It was 46-20 at halftime, with the Ducks shooting 68% overall, including 5 of 6 on their 3-point attempts. Pritchard led Oregon with 13 points and was supported by 10 from Richardson, questionable to play after a sprained ankle suffered a week ago in a win over Oregon State caused him to miss practices leading up to the game.

“I thought defensively we played real hard for most of the game,” Altman said. “In the first half, we flew around and made defensive plays. The ball movement was good and obviously we shot it well from 3, and that gives you a big bost.”

California: The Bears have lost their last six games against Oregon, and haven’t won in Eugene since 2014.

Oregon: Unbeaten in 16 home games this season, the Ducks have stretched their home winning streak to 21 games.

The win for Oregon raised Altman to 668 coaching victories, moving him into a tie with Gary Williams for 25th in Division I victories.

California: at Oregon State on Saturday to conclude the regular season.

Oregon: plays its final home game against Stanford on Saturday.