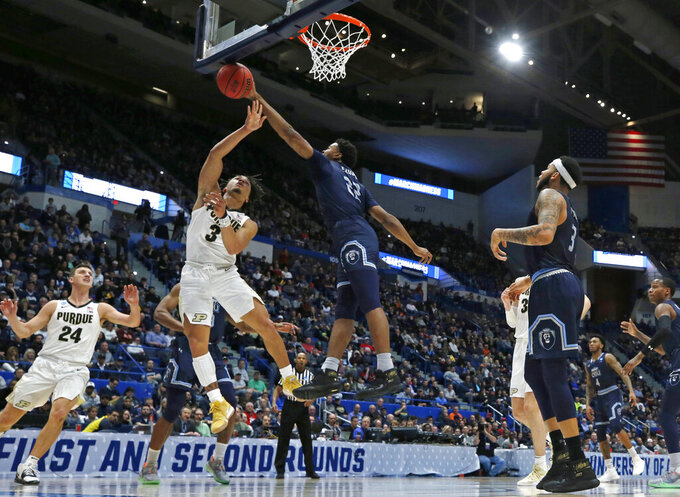 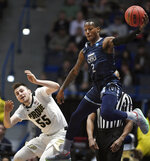 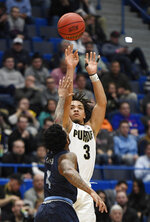 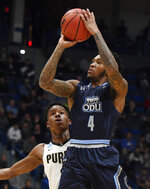 HARTFORD, Conn. (AP) — If this is what a slump looks like for Carsen Edwards, Purdue coach Matt Painter can live with it.

Edwards scored 26 points and third-seeded Purdue coasted to a 61-48 victory against Old Dominion on Thursday night in the first round of the NCAA Tournament.

The Boilermakers (24-9) will play reigning NCAA champion Villanova, the sixth-seed in the South Region, on Saturday.

Edwards, the Big Ten's leading scorer, has been in a shooting slump recently and dealing with a sore back that he insisted was fine. The junior guard had shot 32 percent from the floor in his previous 11 games, and was 7 for 33 from 3-point range in the three games before the tournament.

"We don't talk about a slump or things like that," Edwards said. "I'm just focused on helping my team win."

Against ODU, Edwards was again a high-volume scorer, going 7 for 23 from the floor and 4 for 12 from 3. But he also had seven rebounds and four assists.

"He hasn't shot a high percentage this year," Painter said. "Yet we won the Big Ten and we got a 3 seed. Ultimately, that's what your goal is. He's one of those guys you feel he can get out of it."

The Boilermakers scored the last 11 points of the first half as ODU went stone cold. The Monarchs missed their last 11 shots of the half and went scoreless for 6:17 as Purdue took a control and led 32-19 at the break.

It got no better for the Monarchs in the second half. Matt Haarms, Purdue's 7-foot-3 center, made a 3 from the corner to make it a 17-point game with 16:50 left. It was Haarms' seventh triple of the season. A minute later, Edwards pulled up for a long 3 that made it 43-23 and prompted ODU coach Jeff Jones to call a timeout.

"We weren't going to fold on this stage," Stith said.

Xavier Green's running hook over Haarms cut the lead to 55-46 with 4:23 remaining. But it never got any closer.

Old Dominion: The Monarchs reached the NCAA Tournament for the first time since 2011 with Jones battling prostate cancer this season. The season ended with a thud, but it will still go down as one of the most memorable in the history of the program.

"They stuck together through difficult times, when normal teams might not," Jones said. "As much as losing hurts I'm more appreciative of what these guys have done and how they've gone about it."

Purdue: The Boilermakers played most of the game without guard Nojel Eastern, one of the best defensive players in the Big Ten. The sophomore rolled his ankle in pregame warmups and did not start. Eric Hunter Jr. started for the first time this season. Eastern tried to give it a go in the second half and played 10 minutes, but with Purdue mostly in control there was no need to push it.

Painter said he played Eastern mostly to get him ready Villanova.

Hunter, who came in averaging 12 minutes, played 23 minutes and had 2 points, four rebounds and three assists.

"Even though he didn't score a lot of points, he didn't turn the ball over. He had the best plus-minus on our team," Painter said.

Old Dominion: The Monarchs have to replace their top two scorers (Stith and Caver) and 7-foot-1 center Elbert Robinson.

Purdue: The Boilermakers are 0-3 against Villanova with their last meeting in November 2016.