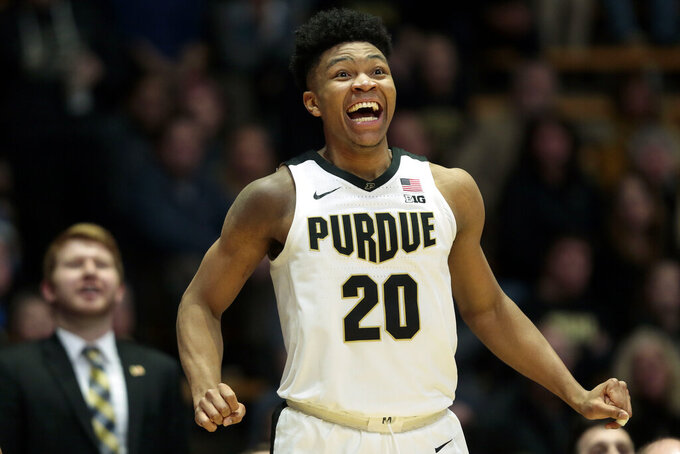 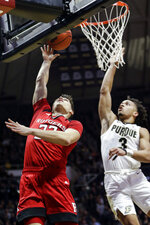 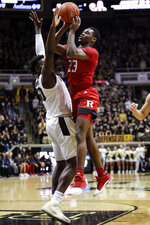 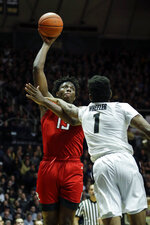 WEST LAFAYETTE, Ind. (AP) — Carsen Edwards continues to cause fits for opponents and few have found a way to contain him.

The junior guard scored 13 of his 19 points in the first half, and finished with six assists and five rebounds to lead Purdue to an 89-54 win over Rutgers on Tuesday night.

"He's a tough stop," Rutgers coach Steve Pikiell said. "I actually watched all the tapes and no one has been able to stop him. He plays with tremendous confidence and can make tough shots."

Edwards was 5 of 10 on 3-pointers and tied Chad Austin for sixth on Purdue's all-time list for 3-pointers made (212).

Trevion Williams had 16 points and 13 rebounds and Sasha Stefanovic added a career-high 14 points for the Boilermakers (11-6, 4-2 Big Ten Conference) who have won five of their last six.

Montez Mathis scored 19 points, Shaq Carter had 10 points and seven rebounds and Geo Baker had 10 points and five rebounds as the Scarlet Knights (8-8, 1-5) played their second straight game without leading scorer and rebounder Eugene Omoruyi. He was out again with a knee injury suffered against Ohio State last week.

After a 9-0 run before halftime, Purdue scored nine straight points — two 3-pointers by Ryan Cline and another by Edwards — early in the second half to pull away for good.

"The ability to get into transition whether it was turning them over or getting rebounds, I think really helped us get some good looks, not only at the rim but also some 3s," Purdue coach Matt Painter said. "We talked about in the first five minutes of the second half about just making it hard on them, try to make it hard on Geo Baker and just doubling their big guys, not let them get easy ones or putbacks."

Mathis scored late in the first half to cut Purdue's lead to 31-27, but the Boilers scored nine straight and led 40-27 after a steal and fast-break layup by Edwards with 48 seconds remaining in the half.

Cline finished with 12 points going 4 of 6 from 3-point range and passed Cuonzo Martin for eighth on Purdue's all-time list for 3s made (180).

The Boilermakers were 14 of 28 from 3-point range and tied their season-high for 3s made.

Williams continues to come through for the Boilermakers in a big way and it's not going unnoticed.

Rutgers: A week after stunning a ranked Ohio State team 64-61, the Scarlet Knights stayed with Purdue for much of the first half. But playing without Omoruyi, who averaged 14.6 points and 7.5 rebounds in the first 14 games, took its toll. Freshman guard Caleb McConnell, however, was back in the lineup after leaving early with an injury at Minnesota.

Purdue: The Boilermakers continue to be dominant at home and move to 8-0 in home games this season. They're dominant against Rutgers at home, too. The Boilers have won the last three meetings with Rutgers in West Lafayette by a combined 85 points.

Purdue: Hosts No. 25 Indiana on Saturday.