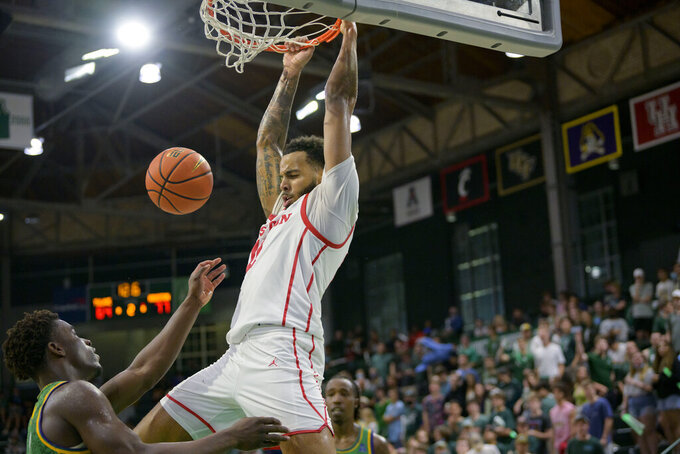 NEW ORLEANS (AP) — Kyler Edwards and the 14th-ranked Houston Cougars are showing the type of resilience and stamina that coach Kelvin Sampson is gratified to see as the postseason nears.

Edwards scored 14 of his 21 points in the second half as No. 14 Houston took control en route to an 81-67 over recently resurgent Tulane on Wednesday night.

The Cougars' seventh road victory this season came on the heels of a double-overtime triumph at Wichita State just three days earlier.

“This team has a resolve about them and a toughness about them that I really respect,” Sampson said. "For those guys to come out and play that hard in the second half when it was winning time – just respect. I’m around these kids every day, so nothing they do surprises me at this point.”

Taze Moore punctuated his 18-point performance with a two-handed alley-oop dunk with just more than a minute remaining, and Fabian White Jr. had 12 points and three blocked shots for the Cougars (23-4, 12-2 AAC), who shot 62% in the second half, including 6 of 13 from 3-point range.

“We just told our guys, ‘Don’t hesitate. Let it fly. And if it misses, we’re going to go attack the offensive glass,’” Sampson said.

“It’s just really about being ready when your name is called,” Roberts said. "My confidence is getting better and I’m just going out there and playing free, not thinking about making mistakes.”

Jalen Cook scored 19 points and Kevin Cross added 16 for Tulane (12-12, 9-6), which led by as many as five points during a tight first half, but struggled to stay close during the final 20 minutes. Sion James and Jaylen Forbes each scored 13 for Tulane.

“They’re a good basketball team; we’ve beaten everybody in the league but them,” Tulane third-year coach Ron Hunter said. ”We played a top 20 team in the country — in my opinion, top 10. ... Remember, they were in the Final Four a year ago."

The intimate, 89-year-old Fogelman Arena in Devlin Fieldhouse appeared to have virtually all of its 4,100 seats occupied, with a number of fans standing for what had the potential to be a benchmark matchup for the Green Wave. Tulane came in with victories in five of its previous seven games.

The crowd was raucous during the first half, when there were eight lead changes and six ties.

“That was an incredible environment,” Hunter said. “We lost a basketball game, but I thought our program won.”

Houston closed the first half on an 8-3 run, with Edwards' free throws giving the Cougars a 32-27 halftime lead.

“We had a solid first half,” Cook said. "In the second half, we came out like we didn’t have any hope. We just have to learn off this.”

The Cougars opened the second half with Edwards' 3 and Moore's layup to take their first double-digit lead, and their advantage hovered around 10 points for the remainder of the game, growing as large as 16.

“It was really tough to play at Wichita — two overtimes, and with toughness we got it done,” Roberts added. “Same when we came here."

Houston: The Cougars strengthened their hold on first place in the conference with the next three of their four remaining regular-season game at home. The victory also gave Houston a sweep of the season series after a 72-63 victory in Houston on Feb. 2.

Tulane: The Green Wave were largely competitive but plagued by inconsistent shooting, difficulty securing rebounds and defensive breakdowns that gave some of Houston's most productive players open shots. But the Wave have become considerably more competitive in a year's time. When Tulane hosted Houston last season, the Cougars led by 30 in the first half and won by 23.

The crowd booed the Cougars loudly after they continued to push the ball up the court and put on a dunking exhibition with a double-digit lead on their final few possessions, particularly after a final round-house dunk by Ja'Vier Francis with a second to go.

“I just want to publicly apologize to Tulane’s fans, their players and coaches, especially for that last dunk," Sampson said. "That’s not a classy move. I hated that.”