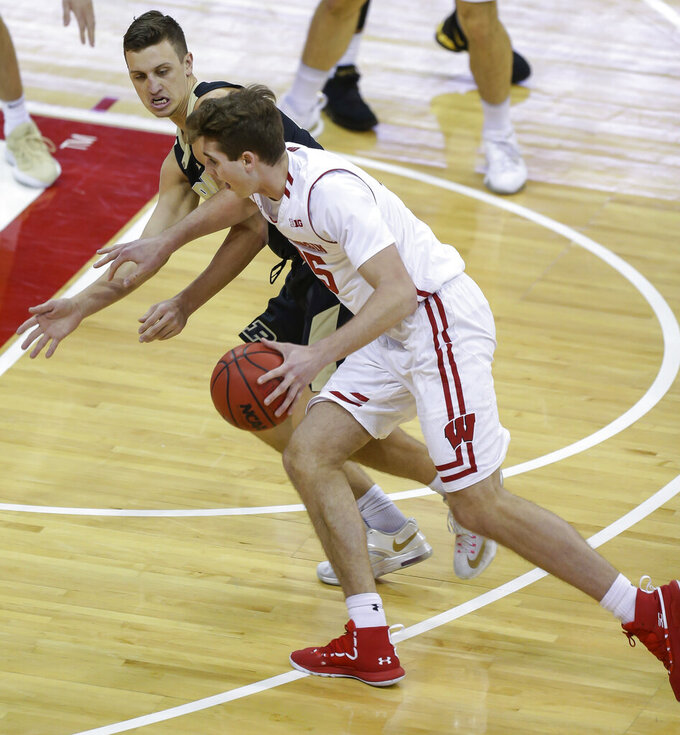 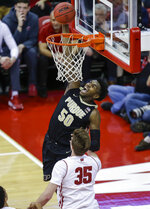 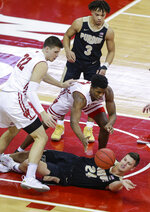 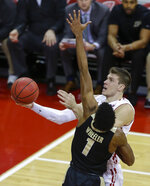 Coming off a poor shooting performance in a loss to Michigan State on Tuesday, Edwards scored 36 points as Purdue outlasted Wisconsin 84-80 in overtime.

"I thought he regrouped individually and had a really good game," Painter said.

Edwards made some questionable decisions, including a long 3-point attempt that he airballed with 3.2 seconds left in regulation that gave the Badgers (11-5, 3-2) a desperation drive that D'Mitrik Trice couldn't convert.

But Edwards also put constant pressure on the Wisconsin defense, which proved key in the final seconds. As he drove with the game tied at 79, Carsen drew two defenders, leaving Grady Eifert open under the basket. Eifert missed the short attempt, but was fouled and converted both free throws with 38.3 seconds left to give Purdue a lead it wouldn't relinquish.

The Boilermakers finished the game 17 of 30 from the line, which included 8 for 12 in overtime to seal the win.

Wisconsin, meanwhile, came in averaging 9.1 turnovers a game, second best in the NCAA. But the Badgers committed a season high 17 for the game, including two in a key overtime stretch as they only managed a Trice free throw over their final five possessions.

Wisconsin made it to overtime thanks to some late heroics by Trice in the final 30 seconds of regulation. Just 2 of 10 before the final stretch, he hit back-to-back 3 pointers — banking the first one — to tie the game at 74 before Edwards' missed 3. Trice said he was trying to draw contact as he raced down the court and missed the wild attempt.

Coach Greg Gard said it was unacceptable that the Badgers were so sloppy with the ball and that they couldn't keep Purdue off the offensive glass.

Ethan Happ led Wisconsin with 31 points and 13 rebounds. He also had six assists, but accounted for eight of the Badgers' turnovers.

"You're going to have a bad time when you turn it over that much and then don't clean up the glass on both ends," Gard said.

Freshman Trevion Williams got his first career start with junior center Evan Boudreaux out with a groin injury he suffered in the second half of Tuesday's loss at Michigan State. Williams, who registered his first career double-double with 13 points and 12 rebounds against the Spartans, finished with nine points and 11 rebounds. Williams and Matt Haarms, who Painter brought off the bench, both struggled with foul trouble. Haarms, who started Purdue's first 11 games, was whistled for a foul with 7:25 left in the first half and then got hit with a technical as he yelled in protest walking back toward the Purdue bench. "You get a bad call against you, just walk away," Painter said. "I thought Travion stepped up and played pretty well."

Purdue: The Boilermakers won their first road game of the season, picking up a quality win in a place they hadn't scored more than 75 points since it opened in 1998.

Wisconsin: The Badgers faltered down the stretch as they lost back-to-back home games sandwiched around a win at Penn State.

Wisconsin: Plays at Maryland on Monday.