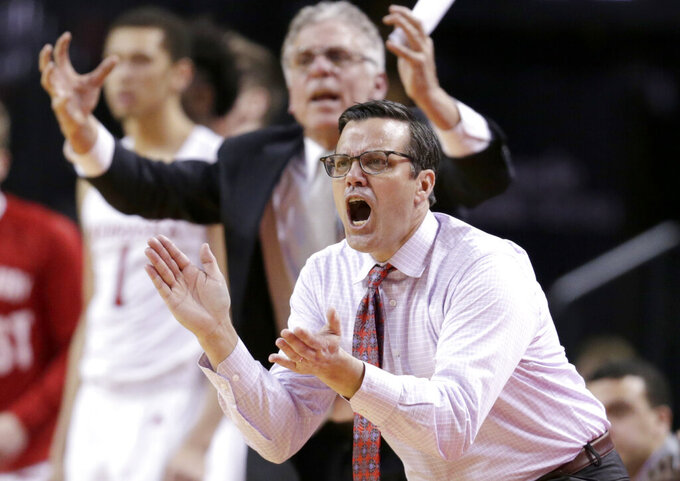 Nebraska coach Tim Miles urges his team on, during the second half of an NCAA college basketball game against Purdue in Lincoln, Neb., Saturday, Feb. 23, 2019. (AP Photo/Nati Harnik)

LINCOLN, Neb. (AP) — Purdue's Grady Eifert headed toward the basket when he saw Carsen Edwards put up a 3-pointer and the No. 15 Boilermakers leading Nebraska by a point with two minutes left.

Flying across the lane, Eifert grabbed the partially blocked shot with a second on the shot clock and managed to get off one of his two key late shots that pushed Purdue to a 75-72 win Saturday.

"I saw it got tipped," Eifert said. "I knew the shot clock was winding down. I knew I would be able to come down and gather myself. I just flicked it up there and it rolled. I couldn't see it after I shot it. Everyone celebrating, I could tell it went in."

A couple minutes earlier, Eifert beat the shot clock when he slipped to the basket for an uncontested layup off an inbound pass from Ryan Cline.

"That doesn't happen unless Carsen sprints off there and makes a hard cut," Eifert said. "Kline made a perfect pass for me to catch and go up with it right away. When it's one second on the clock, everyone's thinking Carsen's getting the ball there. We just wanted to get something at the rim."

Nebraska coach Tim Miles could only shake his head and toss a water bottle as Eifert did his thing.

"First of all, I think you just credit Purdue and Grady Eifert," Miles said. "Those are very good plays. Credit the victor, right? Second of all, I don't think we made a mistake. It was a scramble situation defensively. Sometimes the game breaks you."

"We went to Indiana, we were fortunate, but we found a way to win," Purdue coach Matt Painter said. "We came here today and we were fortunate again. We still found a way. I think that's what good teams do. To be able to hang in there, make our free throws, not turn the basketball over and outrebound them by 18, we'll take that."

The Boilermakers' 14th win in 16 games pulled them into a brief three-way tie for first in the Big Ten with Michigan and Michigan State. The tie will be broken Sunday when those two teams meet in Ann Arbor.

Cline's 3-pointer to end the first half gave the Boilermakers a two-point lead, and they never trailed again. Purdue made 7 of 8 free throws down the stretch and finished 23 of 26 from the line.

Edwards and Cline had 13 points apiece for the Boilermakers. Edwards continued to struggle with his shot after going 4 for 24 overall and 0 for 10 on 3-pointers against Indiana. With Watson the primary defender on Edwards, the Big Ten scoring leader was 3 for 16 and 1 for 10 on 3s Saturday and had no field goals the final 34 minutes.

"I'm just going to step up to the challenge no matter what," Watson said. "Try to bring it on defense, just trying to play with energy and confidence on defense."

Purdue: The Boilermakers are 16-5 all-time against the Huskers, 9-2 in Big Ten games and 3-1 at Pinnacle Bank Arena. Purdue secured a fifth straight 20-win season and its 12th in Painter's 14 seasons.

Nebraska: The crowd of 9,051 was the smallest of the season and one of the smallest since the Huskers began playing in Pinnacle Bank Arena in 2013-14. The low turnout came during a winter storm and the public was urged to stay home. "To be able to come here in blizzard-like conditions and see all those fans, it's pretty cool," Painter said. "It shows the loyalty and support they get here at Nebraska."

Rex Burkhead, the popular former Nebraska running back who now plays for the Super Bowl champion New England Patriots, was wearing a Huskers basketball jersey and a stocking cap as he shot T-shirts to the crowd during a timeout in the first half.