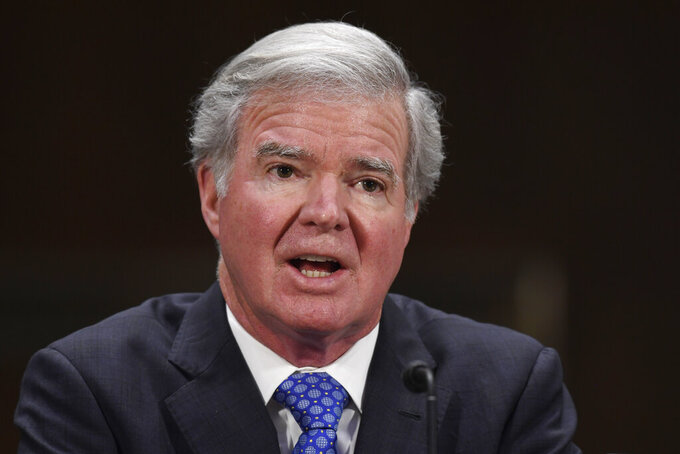 FILE - In this Feb. 11, 2020, file photo, NCAA President Mark Emmert testifies during a Senate Commerce subcommittee hearing on intercollegiate athlete compensation on Capitol Hill in Washington. Just days away from the start of the NCAA's most lucrative and high-profile event, the Division I men's basketball tournament, Emmert spoke to the AP about where things stand with the association's attempts to reform its rules related to name, image and likeness compensation for athletes. (AP Photo/Susan Walsh, File)

The National College Players Association said Tuesday that NCAA President Mark Emmert has informed a group of basketball players who started a social media campaign to protest inequities in college sports that he will meet with them after March Madness.

NCPA executive director Ramogi Huma said in a statement he received a letter from Emmert in response to the advocacy group's request for a meeting between the head of the NCAA and three players who led the #NotNCAAProperty protest that started last week.

Through the NCPA, the players had requested to meet with Emmert and one of the NCAA’s top lobbyists on Tuesday morning.

The players responded with a letter back to Emmert, saying they were disappointed he wanted to “delay this important conversation for at least two weeks.”

"From our perspective, it’s difficult to imagine any higher priority you may have at this time than addressing concerns that are at the core of state and federal college athletes’ rights legislation, an upcoming U.S. Supreme Court ruling on college athletes’ economic freedoms, and the NCAA’s ongoing discriminatory treatment of female basketball players in its tournament," the players wrote in a letter released by the NCPA. “Can you please explain what you will be doing over the next two weeks that is more important than addressing these matters?”

The players also requested that the meeting include other men's and women's players, and Huma.

“We look forward to receiving confirmation that you will meet with the group we have described, and that you will demonstrate on behalf of your organization and membership that these issues are in fact a priority by meeting with us by Friday of this week,” the players wrote.

The NCAA has committed to changing its rules regarding name, image and likeness rights, but the process has bogged down amid warnings from the Justice Department about possible antitrust violations in the association's proposal.

An NCAA case involving an antitrust ruling is scheduled to be heard by the Supreme Court next week.

The NCAA has asked for help from federal lawmakers in the form of a national NIL law that would preempt dozens of state laws under consideration that would create different rules for competing schools.