Evan Mobley has 17 points to lift Southern Cal past Drake 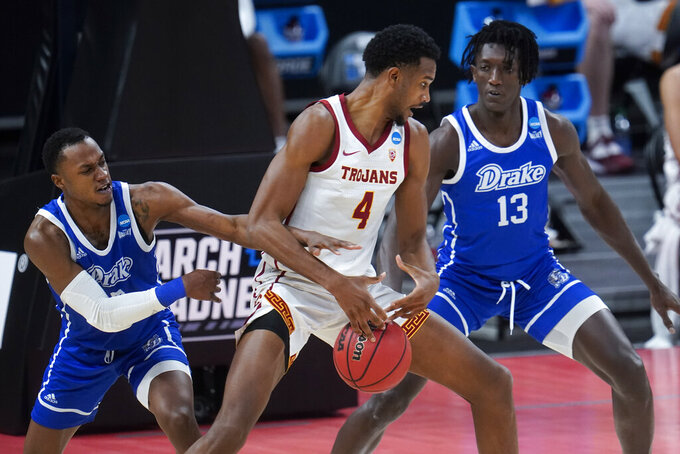 Drake guard D.J. Wilkins (0) reaches for the ball from USC forward Evan Mobley (4) as Issa Samake (13) defends during the second half of a men's college basketball game in the first round of the NCAA tournament at Bankers Life Fieldhouse in Indianapolis, Saturday, March 20, 2021. (AP Photo/Paul Sancya)

INDIANAPOLIS (AP) — Evan Mobley had 17 points and 11 rebounds, and No. 6 seed Southern California used smothering defense to earn a 72-56 victory over Drake on Saturday in the first round of the NCAA Tournament.

Mobley, a 7-foot freshman forward and AP second-team All-American expected to be a lottery pick if he declares for the draft, made 7 of 15 field goals and blocked three shots.

“We both had great games, I feel like," Evan Mobley said. “Both pretty big numbers. We’re going to cherish this win, but we can’t dwell on it too long because we’ve got other games coming up."

Drew Peterson added 14 for USC (23-7), which advanced to play No. 3 seed Kansas in the second round on Monday.

Joseph Yesufu scored 26 points for 11th-seeded Drake, but none of his teammates scored more than six. The sophomore guard made 8 of 22 shots in the game while his teammates made just 12 of 46.

Drake (26-5) opened the season with 18 straight wins. The Bulldogs claimed their first tournament win in 50 years in the First Four on Thursday, but that extra game had an effect. Drake shot 29% overall against USC, including a dismal 19% in the second half.

“We certainly got fatigued in that second half a little bit, but I thought the guys continued to fight, and we just didn’t have quite enough to get back into it,” Drake coach Darian DeVries said.

Yesufu struggled like his teammates in the second half — he made just 2 of 10 shots after the break. Evan Mobley was in the middle of USC's zone for the final 10 minutes of the game.

“We assumed he was going to be their main scorer, but we really didn’t lock in on him the entire possession (in the first half)," Evan Mobley said. “And then second half was when we were pointing and talking, and letting our teammates know where he was at, so he couldn’t score as much."

The game had plenty of excitement but the enthusiasm in the socially distanced crowd often didn't match the intensity on the court. Drake had the bigger cheering section, but it was silenced in the second half as the Trojans pulled away. USC's group of a few hundred fans stood and clapped for the team as it left the floor after the game.

Yesufu scored 14 points in the first nine minutes to help Drake stay even. USC led 40-37 at the break behind 13 points and eight rebounds from Evan Mobley.

The Trojans held Drake to one field goal in the first six minutes of the second half to take control. Evan Mobley scored in close to push USC's lead to 51-40.

Yesufu tried to keep the Bulldogs in it. His 3-pointer cut USC's lead to 57-50 and led the Trojans to call a timeout.

Peterson came out of the timeout with a 3-pointer for USC, then Tahj Eddy made a three to push the advantage out to 13.

“I thought our guys showed a lot of defensive toughness, especially in the second half to pull this win out, and we’re happy to go on to the next round," USC coach Andy Enfield said.

Yesufu was averaging single digits this season before closing on an eight-game tear during which he averaged 23.6 points per contest. The sophomore guard scored 36 and 32 in two games against Evansville and scored 21 in the First Four win over Wichita State.

“He left it all out there,” DeVries said. “He was trying to make every winning play he could in that second half to keep us in it.”

DeVries: “We don’t mind wearing the masks. We’d have love to have worn them for another week here if we could have. But from our standpoint, we’re just thankful that we got here and got this chance to play.”

USC is 5-11 all-time against Kansas and has lost the past seven meetings with the Jayhawks in a skid that began in 1981. The teams have met just once in the NCAA Tournament, with Kansas beating USC 43-32 in 1940. USC’s last win was an 89-83 overtime victory in 1979, closing a run in which the Trojans won five of six meetings.