Even before big upset, Virginia has history of NCAA flops 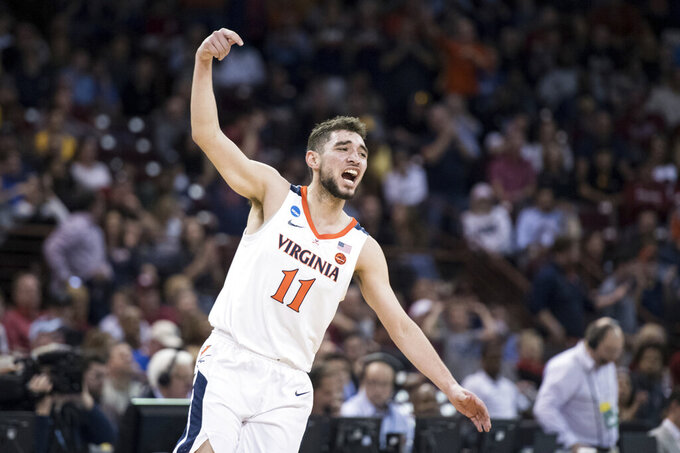 COLUMBIA, S.C. (AP) — Last year Virginia became the first No. 1 seed to lose to a No. 16 seed. But the Cavaliers' recent history, even when they make it past the first round of the NCAA Tournament, isn't all that good.

Coach Tony Bennett has made the tournament six straight years while averaging six losses a season. He has been a top seed four times and a No. 2 seed once. He has not made a Final Four.

But perhaps it was a turning point when the top-seeded Cavaliers found themselves trailing by 14 points in the first half against No. 16 Gardner-Webb on Saturday, with the crowd turning on them and the memories of last year's upset by the University of Maryland-Baltimore County stirring, before they rallied back to win .

"You can come unraveled in that, and we have at times, and we fought through some of that stuff and came out on the positive end," Bennett said. "So I think that was important for sure."

Or maybe it was just another sign that a Virginia squad that rolled through the regular season would hit some kind of stumbling block, often against a lower seed, at the end of March.

The next test comes Sunday against No. 9 seed Oklahoma, which had one of the most impressive victories in the first round, beating Mississippi 95-72 .

The Cavaliers have been bounced out of the tournament in just about every way possible, outside of a buzzer-beater.

The No. 5 seed Cavaliers went scoreless for nearly eight minutes in a second-round game against No. 4 Florida in 2017, losing 65-39 in their most lopsided loss in the past five seasons.

In 2015, the No. 2 seed Cavaliers led just once, 2-0, in the second round against No. 7 seed Michigan State. The Spartans could never pull away but also were never really challenged in the 60-54 upset.

Michigan State also eliminated the top-seeded Cavaliers the year before. The No. 4 seed Spartans got a 3-pointer and a dunk on back-to-back possessions in a game that was tied at 51 in the final 91 seconds to win it, 61-59.

"That will always be part of our story. I understand that," Bennett said.

Junior guard Kyle Guy said the players know the pressure of their tournament struggles and are trying to keep from putting more pressure on themselves.

"Just trying to focus on what's important," Guy said. "We got out of the first round my freshman year. Last year we weren't as fortunate. This year we got the job done."

Virginia hasn't been to the Final Four since 1984, when a plucky seven seed in what was then a tournament with just 12 teams in a region made it to the national semifinals the year after Ralph Sampson headed to the NBA.

Bennett said he doesn't measure his own success by how far his team gets or whether he ever makes a Final Four. Instead, as he reminded his players often after the huge upset last year, defeats don't define who you are; instead, it is how you respond to adversity and how hard you try.

"It's a worthy goal to go after," Bennett said of the national championship, "but only one gets it."