Ewing hopes to carry on Thompson's legacy at Georgetown 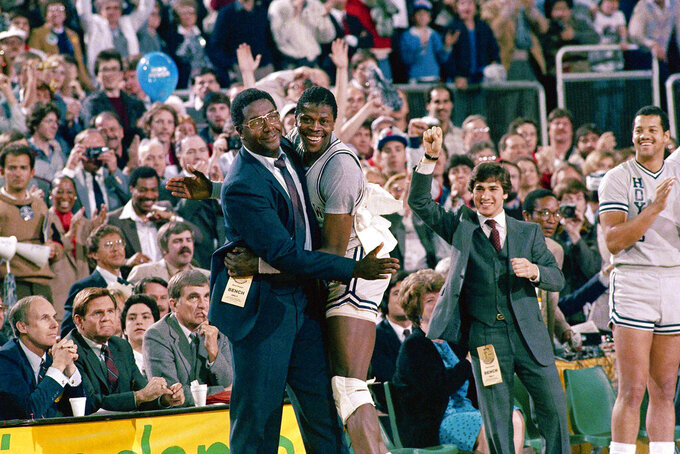 FILE - In this April 2, 1984, file photo, Georgetown head coach John Thompson, left, gives a happy pat to the most valuable player Patrick Ewing, after Georgetown defeated Houston 84-75 in Seattle. John Thompson, the imposing Hall of Famer who turned Georgetown into a “Hoya Paranoia” powerhouse and became the first Black coach to lead a team to the NCAA men’s basketball championship, has died. He was 78 His death was announced in a family statement Monday., Aug. 31, 2020. No details were disclosed.(AP Photo/File)

WASHINGTON (AP) — Georgetown coach Patrick Ewing said Friday he will try to carry on the legacy of his former coach and lifelong mentor John Thompson, who died Sunday at age 78.

Ewing, who won the 1984 national championship at Georgetown as a player under Thompson, returned to the school as coach in 2017 after a Hall of Fame NBA career.

He understands that he is now the school's strongest link to Thompson, who took over a lowly Hoyas program and turned it into a national powerhouse.

“His legacy will always live on,” Ewing said during a video call with reporters. “Through me, through Alonzo (Mourning), through Dikembe (Mutombo), through all of the people he’s coached.”

“He has done a great job of teaching us not only to be great athletes but also great human beings. Now it’s my role, my responsibility to keep doing those things to the kids I’m teaching.”

Ewing, who's 58, said Thompson was like a second father. They met when Ewing was a 16-year-old high school sophomore and remained close in the decades since.

“His teachings continue to guide me,” Ewing said. “I will definitely miss the opportunity to pick up a phone and call him with whatever questions I might have. Not only just coaching but also my life.”

Ewing said Georgetown players would likely wear a patch on their jerseys honoring Thompson, and he planned to speak to the university about putting Thompson's name on its home court. Georgetown opened the Thompson Center on campus in 2016 to serve athletes in all sports. It features a life-size statue of Thompson in the main lobby.

Ewing said he visited with Thompson just two days before he died. Thompson had been hospitalized but was released to his home a couple weeks before his death.

“I was able to go over there the Friday before he passed,” Ewing said. “We sat and talked and just laughed. I didn’t know it was going to be goodbye because I was planning to go back. Then I got the text late on Sunday that he had passed.”