Experience abounds as Virginia looks to contend again in ACC 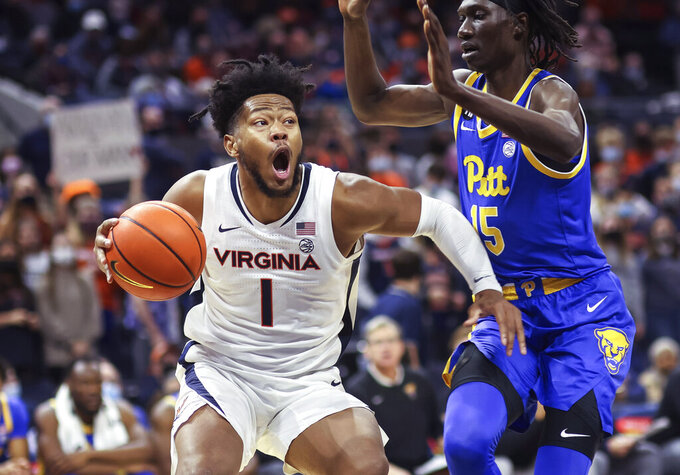 Experience has made high expectations return for Virginia.

The Cavaliers, a team in transition last season, have all five starters back and have added some complementary pieces. A 10-day trip to Italy helped the new additions build chemistry with the veterans, and gave coach Tony Bennett a seasoned team in his 14th season. Virginia is ranked No. 18 in the preseason AP Top 25.

“Last year was a year of maybe not to what our standards usually have been, but we played a lot of big-time games, won some great games, got some postseason experience, so that was good,” Bennett said. “And then going to Italy was good for all these guys.”

Virginia, the 2019 national champion, hasn't won an NCAA Tournament game since. The 2020 team was trending upward when the COVID-19 pandemic wiped out the postseason. The Cavaliers were eliminated by Ohio in the first round in 2021 and missed the tournament this past March.

Virginia's chances to get back to the Big Dance were bolstered by the return of Kihei Clark, the team's longtime floor leader. Forward Jayden Gardner, an East Carolina transfer, is back after a strong first season in the Atlantic Coast Conference. He averaged 15.3 points and 6.4 rebounds and should only be better this year.

Ben Vander Plas, a 6-foot-8 transfer from Ohio, brings versatility that should help ease the pressure on Gardner. He also may win over Cavs fans who remember him leading the Bobcats past fourth-seeded Virginia in that NCAA Tournament game.

“He’s got a great way about him,” Bennett said of Vander Plas, a graduate student.

Virginia's highly regarded recruiting class is led by Isaac McKneely, a two-time West Virginia Gatorade player of the year who averaged 22 points three years in a row in high school. His team also played Bennett’s pack-line defense, an advantage since it often takes players a season to learn the system.

“I think with this first-year class ... you see flashes of, like, wow, what they can become,” Bennett said.

Here are some things to watch about Virginia this season:

Vander Plas averaged 14.2 points and 6.8 rebounds last year and figures to blend right in on a team that has often struggled to score. His ties with Bennett run deep, the coach having played with Dean Vander Plas — Ben’s father — at Wisconsin-Green Bay.

“They actually named Ben after my father (Dick) Bennett, so I figured I’d be the worst recruiter in the history of the game if I can’t get a guy who is named after my dad and I’m a teammate of his dad to come to Virginia,” Bennett said.

The Italy trip gave Vander Plas and Virginia's four freshmen extra time to figure out the pack line in live action. Mastering the defense buys playing time under Bennett. Gardner, for sure, understands.

“I think this year, just the defense just slowing down for me and just getting accustomed to it and knowing where to be, and also encouraging the young guys as they go through their first year because I just went through it, and I think that’s been a big step for my development on the defensive end,” he said.

The Cavaliers have often been short on inside muscle, but that should not be the case this year. Besides Gardner and Vander Plas, redshirt junior Kadin Shedrick brings a shot-blocking presence. Bruising 7-1 Francisco Caffaro is solid on defense and the glass and his ability to score inside has improved considerably.

Reece Beekman emerged as a floor leader last season. He led the ACC in assists (5.2 per game) and steals (2.1) last season, was voted to the All-Defensive team and is effective at getting to the free-throw line. If fellow starter Armaan Franklin can improve his outside shooting, it would help the inside scorers get free. Franklin was 53 of 179 (29.6%) from 3-point range last season.

The Cavaliers' nonconference slate is ambitious. They are set to play No. 3 Houston, No. 5 Baylor and either No. 8 UCLA or No. 23 Illinois. They will visit No. 22 Michigan in the ACC/Big Ten Challenge. During ACC play, they have a home-and-home with top-ranked North Carolina and a visit from No. 7 Duke.