FDU senior fashions a beautiful ending to a terrible game 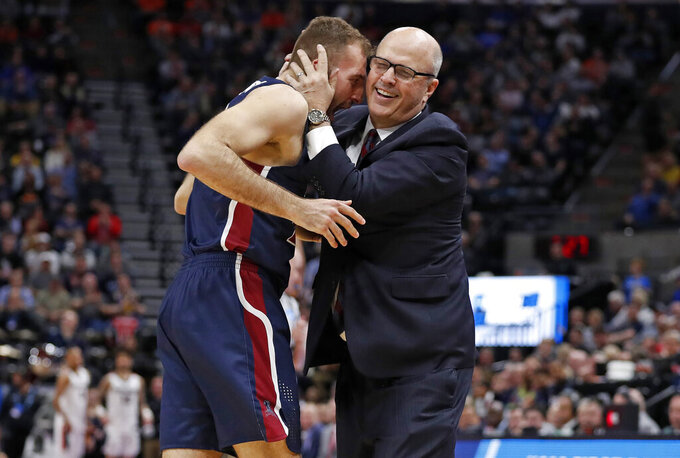 For him, it was a bucket as beautiful as they come.

A debilitating back injury at the beginning of the season kept the fifth-year senior for Fairleigh Dickinson on the sideline for 33 games, but he never stopped rehabbing, never gave up, and kept working to get back on the court.

His reward came Thursday night at the tail end of an 87-49 loss to Gonzaga, when he took a pass from Brandon Powell and made a layup while getting fouled with 28 seconds left. It trimmed Fairleigh's deficit to 38. Beciri shared a long embrace with his coach — one that looked more like a championship hug than something for after a meaningless hoop to make the scoreboard look less bad.

"Truly, a dream come true," Beciri said. "Being a fifth-year senior, and my career is over now. I've played basketball my whole life. It's an amazing honor to go out like that."

With his rehab going well and the Knights in the NCAA Tournament, Beciri said he asked coach Greg Herenda if he could just suit up, presumably just to sit on the bench. Herenda figured, 'Why not.' And then, with the game against Gonzaga completely out of hand, and with the trainers saying Beciri was ready to go, Herenda decided to give him a taste of the tournament.

With 30 seconds left and the teams playing out the string, Pat McNamara picked up a loose ball and gave it to Powell who saw Beciri streaking to the rim. Beciri made the layup while getting hacked. He rushed over to Herenda and the coach pulled him in, then grabbed him by the head for a long embrace.

All was soon forgiven. The last-minute bucket put a lovely little bow on an otherwise rough evening for the Knights.

"If you can get beat by 38 points and be euphoric and hug somebody, it's special," Herenda said. "It's a hard thing to do, to be on national TV, and get a little bit exposed. And then, you're in front of the camera and your guy cuts it to 38, and you're the happiest guy in the building."

Well, make that the second happiest.

Soon, Beciri — "Write that name down. He's a business major and a beautiful person," Herenda said — will begin the process of getting his resume together and applying for jobs.

But it's hard to imagine any desk job topping this one shining moment.