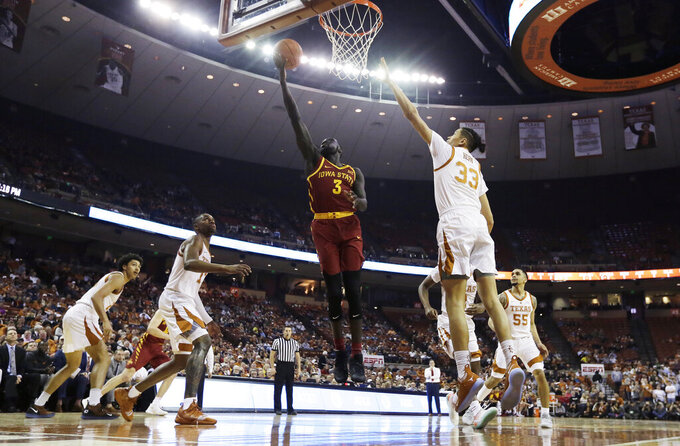 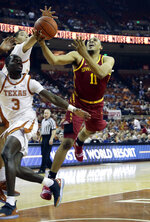 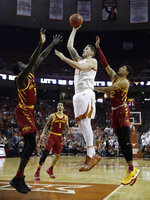 AUSTIN, Texas (AP) — Nearly 13 minutes into Texas' game against Iowa State on Saturday, the Longhorns' most prolific 3-point shooter had not launched even one attempt.

Coleman found his teammate, and Febres made a shot. From there, Febres kept going, converting 8 of 10 3-point attempts and scoring 26 as Texas defeated Iowa State 86-69.

Both the total points and 3-point baskets are career-bests for the sophomore guard.

Febres has started the last three games, replacing the suspended Kerwin Roach II. During those games Febres has hit 20 of 39 3-pointers.

"I had a lot of open looks," Febres said. "A lot of teams now deny me (the ball). But I was wide open and (teammates) kept feeding me."

Much to the surprise of at least one Texas teammate and to the disappointment of Iowa State coach Steve Prohm.

"Am I shocked?" said Texas guard Eli Mitrou-Long, answering a question. "Yeah, I am. The way he's shooting the ball, I think I'd deny him the whole game."

Prohm said the Cyclones knew not to leave Febres open.

"He's the one guy we knew we couldn't lose," Prohm said.

The Cyclones have lost three of their last four games and are not playing well, Prohm said. But, added Shayok, "I have no doubt we can figure it out."

Iowa State: The Cyclones were without Cameron Lard, a 6-9 key reserve forward who was suspended for a violation of team rules. Prohm said he and Lard will meet on Monday and that could determine if Lard returns Wednesday at West Virginia. Lard was suspended for the month of November as well, also for a violation of team rules. Lard averages 6.8 points a game in Big 12 competition with 70 percent shooting accuracy from the field. Iowa State converted 6 of 17 3-pointers against Texas after hitting 11 of 23 while beating Oklahoma on Monday, including 8 of 14 in the second half.

Texas: Roach, the Longhorns leading scorer, missed his third straight game while under indefinite suspension for a violation of an unspecified team rule. The school has not specified if and when he will return. The Longhorns lost the first two games he missed by a total of three points.

Iowa State Starter Nick Weiler-Babb played just six minutes in the second half after suffering a bruised knee late in the first half.

Texas center Jaxson Hayes left the game after getting hit in the face while competing for a rebound early in the second half. A team spokesman said Hayes did not suffer a concussion.

Both players are expected back for the next game, the two coaches said.

Texas blew a 19-point second-half lead before losing to Baylor in overtime on Wednesday. The Longhorns led Iowa State by 21 early in the second half, and the Cyclones cut it to 15 twice, the best they could do.