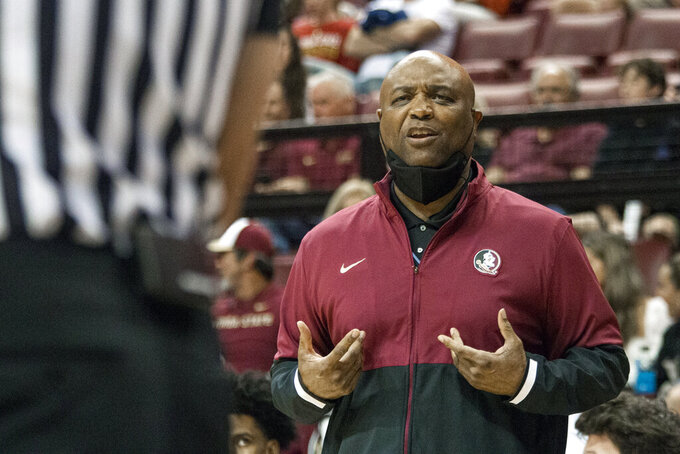 Florida State head coach Leonard Hamilton disagrees with the referee in the first half of an NCAA college basketball game against Pennsylvania in Tallahassee, Fla., Wednesday, Nov. 10, 2021. (AP Photo/Mark Wallheiser)

TALLAHASSEE, Fla. (AP) — Coach Leonard Hamilton said in the days leading up to Florida State’s opener that Malik Osborne would likely be limited because of flu-like symptoms that had forced him to miss the team’s second exhibition game. Osborne instead looked energetic from the start.

Osborne recorded his fourth career double-double and third at Florida State. The 6-foot-9 forward shot 4 of 6 from the floor and 9 of 12 from the free-throw line in 22 minutes, spending much of the game playing center as the Seminoles went with a smaller lineup.

“We needed for him to perform well,” Hamilton said. “We’ve been practicing him at the power forward all year. He has not played the 5 position (center) very much at all. He just moved over and adjusted and gave us a big-time game.”

Osborne said he was determined to play in his final home opener. The senior was able to return for two days of practice leading up to the Penn game.

“I’m going to be on that court,” Osborne recalled telling teammates.

The Seminoles showed some promising early chemistry between their veterans, transfers and freshmen.

Senior guard Rayquan Evans added 14 points and four assists, while Houston transfer Caleb Mills scored 10 of his 14 points in the second half in his debut with the Seminoles. Mills shot 6 of 13 from the floor while adding five rebounds, three assists and two steals.

“He definitely impresses me with his defensive side,” Osborne said of Mills. “He has unlimited energy, impressive quickness.”

Cam’Ron Fletcher, a transfer from Kentucky, had nine points and five steals.

Jordan Dingle had 23 points on 8-of-15 shooting while Jonah Charles and Clark Slajchert added 12 points apiece for Penn.

Osborne scored 17 points and pulled down eight rebounds while Fletcher scored nine points and had a career-high five steals to help FSU to a 51-39 halftime lead. FSU had 10 first-half steals, helping to produce 23 points off turnovers.

Florida State is in position to move up in next week's rankings if the Seminoles pick up a win at Florida.

Florida State picked up its first win over an Ivy League school. The Seminoles had gone 0-3 vs. Princeton and 0-1 vs. Harvard.

Osborne scored the most points since his transfer from Rice following the 2017-18 season.

Penn: The Quakers tried to keep up with long-range shooting — they made nine 3-pointers — but fell behind late in the first half and were undone by 26 turnovers.

Florida State: The Seminoles shook off a sluggish start, showed off their newcomers and recorded 15 steals.

Penn: At George Mason on Friday.

Florida State: At Florida on Sunday.