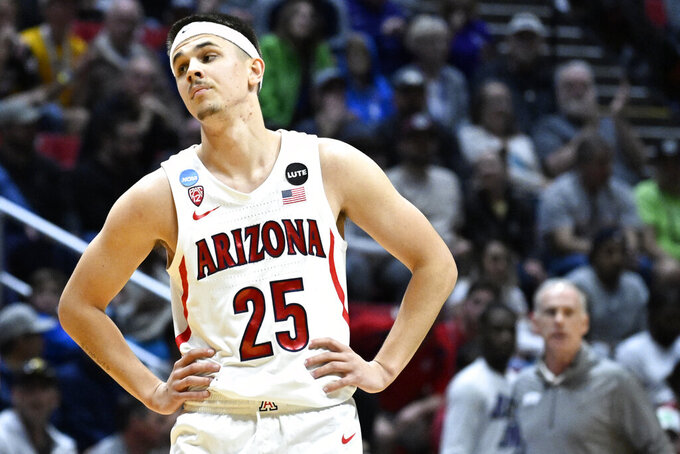 Not just for opponents, but sometimes for the top-seeded Wildcats, too.

The Estonian sophomore is the cocky and feisty sort who can drive opponents crazy, taunt their fans and question game officials. He can give his own coach, Tommy Lloyd, fits with some of his antics. He once missed a game after he got hurt “horsing around” during a pregame meal.

Lloyd has to walk a fine line on how to manage his talented player who gives the Wildcats some extra juice and attitude when he's healthy and playing well.

All signs point to a badly-sprained ankle being well enough for him to play Thursday night when the Wildcats (33-3) face No. 5 Houston (31-5) on Thursday night in the Sweet 16.

“Kerr’s a lot of bark and sometimes a little bite,” Lloyd said Wednesday. “Obviously, you guys see the personality and the antics. He's an emotional player, and he’s having fun is what he’s doing.

“He’s easy to coach. He listens. He gives you eye contact. He’s got a high IQ. I haven’t had any issues with him coaching-wise all year," Lloyd said. "I’ll roll with him every day of the week.”

Kriisa's more than just a showboating player with all those between-the-legs passes and the white headband that suggests a playful, playground spirit to his game. He's had to show real grit just to get on the court in the postseason.

Kriisa sprained his right ankle in the quarterfinals of the Pac-12 Tournament and missed the next three games. He later posted a photo on social media showing massive bruising with deep blue, and purple and yellow hues.

He missed the first-round NCAA win over Wright State, then returned to play 26 minutes in Arizona's 85-80 overtime thriller over TCU.

Kriisa was just 1-of-10 shooting against TCU, but Arizona outscored the Horned Frogs by 24 when he was on the court. Lloyd said that shows just how important Kriisa is to the Wildcats.

Kriissa is one of eight foreign players for the Wildcats. His journey from Eastern Europe to the desert in the American Southwest had a few bumps along the way. And then he wasn't sure he was going to stay when the school made a coaching change.

Kriisa had to sit out much of his freshman season before he was cleared by the NCAA due to a stipend he received while playing for a club team at home. He briefly returned to Estonia to play for the national team while still waiting to join Arizona.

He considered transferring after last season after Arizona fired coach Sean Miller, but changed his mind a week later to stay and play for Lloyd.

On a team led by Pac-12 player of the year Bennedict Mathurin, Kriisa averages nine points and 4.8 assists per game. He had the program's first triple-double in nearly 20 years with 21 points, 10 assists and 10 rebounds in a win over Utah. Kriisa made seven first-half 3-pointers, including a buzzer-beating shot from half court just before halftime.

“I just try to make my threes, keep passing the ball, make sure everybody’s happy," Kriisa said. “Make sure that Ben can keep dunking on people.”

Don't look for the on-court antics to stop against the Cougars. This is a player known for chirping at opponents and fans or chatting up the refs before games and during timeouts.

In a game against Colorado in January, Kriisa stopped at the broadcast table and asked “who invited these refs?” Lloyd has been known to tell his player to “Zip it!” when he reacts to foul calls.

After beating TCU, Kriisa was spotted grabbing an Estonian flag from someone in the stands and jogged toward the section of Horned Frogs fans.

The Wildcats expect to see a lot of Cougars fans packed into the 17,000-seat AT&T Center on Thursday night. San Antonio is just a three-hour drive from Houston.

“It’s not that I’m looking forward to wave to Houston fans or stuff like this,” Kriisa said. “We’re just trying to win the game. If we do win the game, then we’re going to let them know that we won the game."