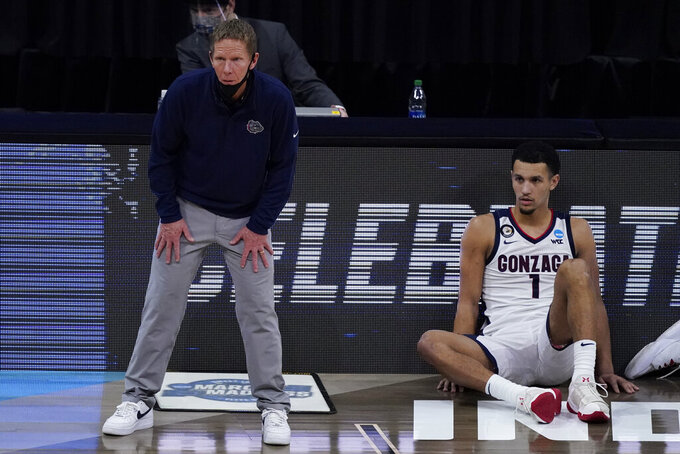 Gonzaga head coach Mark Few and guard Jalen Suggs (1) watch from the sideline during the second half of an Elite 8 game against Southern California in the NCAA men's college basketball tournament at Lucas Oil Stadium, Tuesday, March 30, 2021, in Indianapolis. (AP Photo/Darron Cummings)

INDIANAPOLIS (AP) — The weight of the line, not the lure, unspools the reel. The timing, the rhythm whisk the fly back and forth before it lands in the desired spot.

The physical act takes a mental approach, of knowing the type of hatch for the season, the riffles where the fish like to feed.

Mark Few understood none of this when he first picked up a pole. His idea of fishing back then was to attach a blob of Magic Bait and drop it beneath a bobber.

In the years since, Few has transformed himself into a skilled fly fisherman through wits and will.

He's molded Gonzaga basketball in a similar manner, amalgamating mind and body into an offensive juggernaut.

“They’re both kind of an artform,” former Gonzaga and current Long Beach State coach Dan Monson said. “He’s a very accomplished fly fisherman, but he didn’t start out that way. And this whole program, his offense, everything has been an evolution of 20 years, kind of brick-by-brick building.”

Gonzaga enters the final weekend of the college basketball season on the cusp of history. The Bulldogs are two wins from becoming Division I's first undefeated team since the 1976 Indiana Hoosiers.

Gonzaga's offense has been unlike anything college basketball has seen in decades, maybe ever. The Zags (30-0) led the nation in scoring by more than six points per game and have yet to be tested, winning a Division I-record 27 straight games by double figures.

They've mauled four straight opponents in the NCAA Tournament to reach the Final Four for the second time in five years. Beat UCLA on Saturday and they'll play for a national championship and a chance at history.

“It’s so cool to see it go from ground zero all the way up to where it is,” Few said.

Few has been the engineer, turning a small Jesuit school in eastern Washington into a national powerhouse by thinking big and refusing to shrink from his convictions.

When Few joined Dan Fitzgerald's staff as a graduate assistant in 1990, Gonzaga basketball was an afterthought in the regional scene, much less nationally. The Zags had struggled for so long, Fitzgerald used to joke with his assistants that they were wasting their time and the school's money.

Few wasn't buying it. He had a more ambitious future in mind.

Even after the program reached the regional final in 1999, Monson didn't see continued success as being feasible at such a small school. Other West Coast teams like Santa Clara, Pepperdine and Loyola Marymount had faded after making March magic, so Monson figured the Zags were headed for a similar fall.

“You saw it happen with other schools, so it just didn't seem sustainable,” Monson said. "Mark has always been convinced we could do it.”

Few began building well before he was named head coach after Monson left for Minnesota in 1999.

As an assistant under Fitzgerald, Few used his own money to upgrade to nicer rental cars so recruits didn't think the school had no money. No need to mention he and Monson slept on people's floors because they couldn't afford hotel rooms, either.

Few recruited above the program's status at the time, refusing to accept that players being courted by Pac-10 schools would never choose Gonzaga. When Fitzgerald told his assistants it was a waste of time to recruit those kids, it only fortified Few's resolve.

“It just irritated Mark that it got to the point he would only recruit guys that would be recruited by the Pac-10,” Monson said. “He really started changing the thinking of the program. We don’t have to take a back seat to any of these schools.”

And there's almost no sense arguing once Few has locked onto something.

Few knows basketball. He's proven that. He's also well-rounded and firm opinions come with the territory. Even when friends say, “Mark, you’re wrong,” they know to expect a rebuttal, backed up by facts.

Losing an argument, like losing on the basketball court, is not an option.

“He’s very stubborn, he’s very competitive and he’s going to come across like he’s doing you the favor,” Monson said. “He’ll make you feel like this is the wrong idea, like you don’t know what you’re doing. He won’t tell you that, but you’ll walk away feeling that way.”

Thing is, he's usually right. On a basketball court, there's no doubting it.

Few has built a national powerhouse on conviction.

Those early recruits who believed him set the foundation. Higher-rated recruits followed from success, propelling the program farther.

Few got his players to believe in their abilities, make smart decisions, accept criticism and praise equally.

His system, adapted over the years to the game and the players, became the standard of offensive basketball in the college game.

“There’s not a lot of sugar coating, but there’s never any demeaning," said Tommy Lloyd, Few’s assistant the past 20 years. “I think the guys get pretty comfortable when he tells them something, he’s thought it through, he thinks it’s important and he means it.”

Few also was right about another thing: Gonzaga can play for national championships.

When it's over, win or lose, he'll be back on the water, chasing his other favorite mind-and-body pursuit.