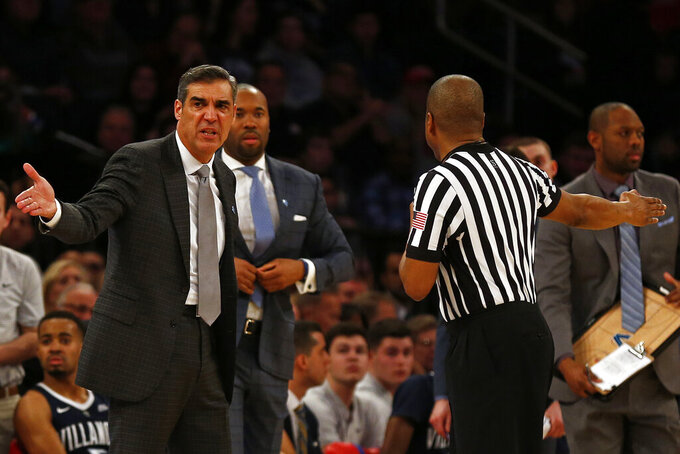 Villanova head coach Jay Wright, left, argues a call with an official during the second half of an NCAA college basketball game against St. John's, Sunday, Feb. 17, 2019, in New York. (AP Photo/Adam Hunger) 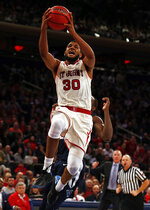 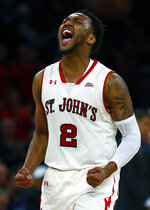 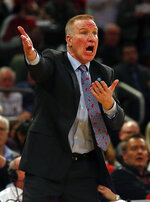 NEW YORK (AP) — A 70-foot shot just before halftime gave St. John's momentum, and LJ Figueroa and the Red Storm used a strong defensive effort in the second half to surprise No. 13 Villanova.

Figueroa scored 22 points and St. John's rallied to beat the Wildcats 71-65 on Sunday night. It was the first win for the Red Storm at Madison Square Garden against Villanova in 17 years, and they accomplished the feat in front of an energetic sellout crowd of nearly 20,000 fans.

"It was as loud as I can remember, maybe louder," St. John's coach Chris Mullin said. "I'm happy for them they got to experience that too. There's nothing like that. There are some great places to play college basketball, but when you get a full Madison Square Garden against a championship team like Villanova there's nothing like that. It's awesome. It helped us. It kept us in the game and took us to another level."

Trailing by 17 late in the first half, the Red Storm scored the final six points, including Justin Simon's shot from the opposite 3-point line that banked in just before the buzzer and made it 37-26.

"We were screaming the whole way into the locker room," said Mustapha Heron, who added 19 points. "We had to do it on the defensive end (in the second half)."

During that run, Villanova coach Jay Wright was hit with a technical foul for arguing a call.

"Their half-court defense went to another level after they pressed us and the crowd got going," Wright said. "We had it to 11-12 in the second half there and they started pressing us. They got that turnover at half court and we got the technical that really got them going. That was the turning point in the game."

The teams traded the lead over the next few minutes before Figueroa hit another 3-pointer that gave the Red Storm a 58-57 advantage with 3:51 left and started an 8-0 run. That was the last basket the Red Storm would make.

The Red Storm led 63-57 with 50 seconds left when Villanova's Phil Booth was fouled shooting a 3-pointer. He made two free throws to get the Wildcats within four.

That's as close as they could get as St. John's converted its free throws down the stretch to complete the biggest comeback since the team rallied from a 20-point deficit against DePaul in 2010. St. John's went 13 for 14 from the free throw line in the final 3:11 of the game.

Joe Cremo scored 14 points for Villanova (20-6, 11-2), and Eric Paschall added 11 points and 14 rebounds. The Wildcats shot just 20 percent from the field in the second half.

"Our defense was everything," Mullin said.

The game was a little bit of revenge for the Red Storm, who lost to Villanova by five after blowing an 11-point second-half lead on Jan. 8.

The Wildcats jumped all over the Red Storm early on, outscoring them 29-10 over the first 12 minutes. During that stretch, the Red Storm went without a basket for 7:39.

"It was a tale of two halves," Wright said. "We were really dominant in the first half, the second half they matched up the intensity."

"It was a great college basketball atmosphere, the Garden was awesome today," Wright said. "Fun to be a part of it — somewhat."

"We played a lot of good teams this year — Marquette, Michigan, Kansas — this team I think is going to be a tournament team," he said.

St. John's Shamorie Ponds had 11 points on 2-of-14 shooting. ... It was the lowest scoring first half for St. John's this season, surpassing the 27 points the team had against Butler. ... St. John's Marvin Clark II hit a 3-pointer to start the second half and cross the 1,000-point career mark. It was his first basket of the game. ... St. John's is 3-1 this season in the conference against the top two teams — Marquette and Villanova.

Villanova: At Georgetown on Wednesday.

St. John's: At Providence on Wednesday.