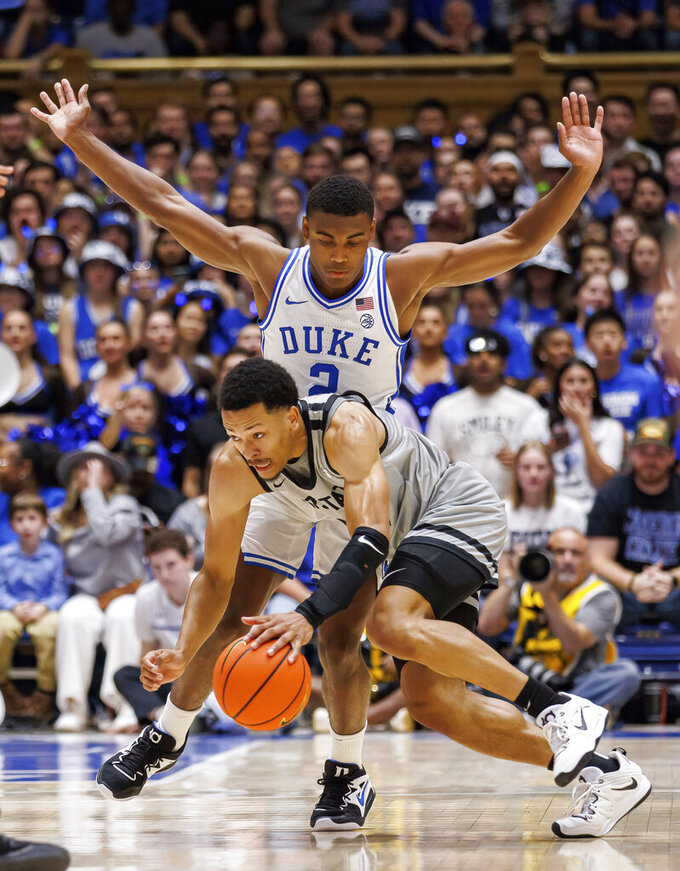 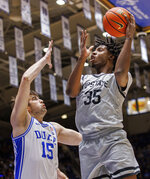 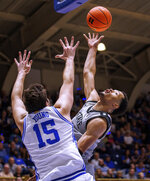 DURHAM, N.C. (AP) — It turns out to be about freshmen so often for Duke, and that proved to be the case Friday night.

Kyle Filipowski had 15 points and 10 rebounds for his second double-double in as many games, and the No. 7 Blue Devils blew out South Carolina Upstate 84-38.

“I’m doing what I should be doing on the offensive and defensive sides,” Filipowski said.

Perhaps the biggest development for Duke was the debut of center Dereck Lively II, the highest-rated recruit nationally in the freshman class. He had been out since a calf injury sustained in a preseason practice.

“I worry about Duke’s success, that’s all I worry about,” Lively said of his much-anticipated outing. “I always bring energy.”

Lively played about 15 minutes. He said there was no pain or tightness.

“Just waiting on my moment, waiting for the right time to show the world what I can do,” Lively said. “Taking it one step at a time.”

He came off the bench and flushed dunks for his only two baskets, providing the tying and go-ahead points after Duke’s ragged opening stretch.

“It was a great way to get the team, the sideline, everybody in the whole building just electrified,” Lively said. “I loved it.”

So did his teammates.

“He’s still getting himself back,” Mark Mitchell said. “I don’t think a lot of teams will be able to match the things he does once he gets back to full strength.”

It will take time before Lively’s full impact is evident.

“His game isn’t going to be back to full right away,” Duke coach Jon Scheyer said. “He did a really good job of pushing through.”

The time without Lively as a regular participant might have long-term benefits for the Blue Devils.

“An opportunity to find some things we might not have found otherwise,” Scheyer said. “Our depth we certainly feel is a strength of ours.”

Six players made at least one 3-pointer for the Blue Devils, who held a 52-27 rebounding edge.

Duke was credited with 39 points off 23 SC Upstate turnovers.

“(It’s a problem) when a team scores 40-something points off your turnovers,” Spartans coach Dave Dickerson said. “We just couldn’t keep the ball.”

“I think we got after it defensively,” Mitchell said.

Despite needing almost four minutes before scoring, Duke led 43-18 at halftime. The Blue Devils closed the first half on a 15-2 run.

Dickerson said the encouraging first couple of minutes was something to dwell on.

“That’s a little win for us right there,” he said.

SC Upstate: The Spartans had their best stretch in the opening two minutes and couldn’t maintain that. Still, it’s bound to be a valuable experience for SC Upstate, which has three more games against Power Five teams before Christmas. The goal will be making considerable strides to improve on last season’s 15-17 record.

Duke: Now it’s time to settle in after hoopla involving Scheyer’s first game as coach earlier in the week. It was important to get Lively, the Atlantic Coast Conference Preseason Rookie of the Year, in action before next week’s showdown with national champion Kansas. That enabled the Blue Devils to work on more personnel combinations in game situations. Aside from allowing a couple of open perimeter shots in the second half, the defense was solid and the Blue Devils prospered from size advantages in the post.

Duke: Faces No. 5 Kansas in Indianapolis on Tuesday night.