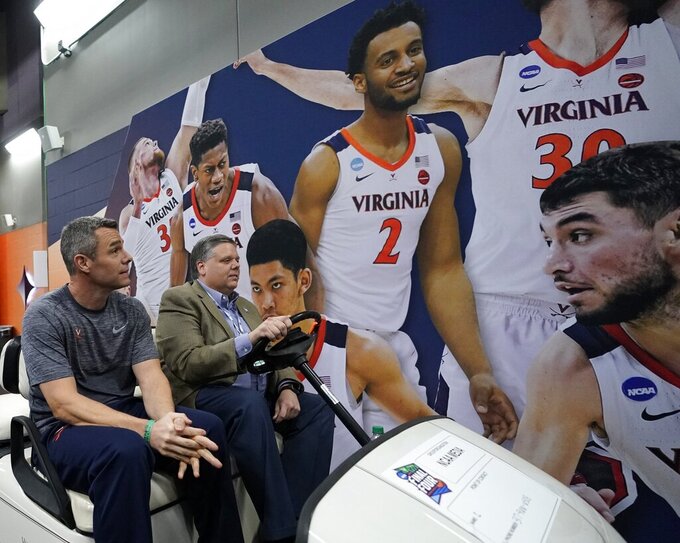 Virginia head coach Tony Bennett looks at a display on the wall as he gets a ride after a practice session for the semifinals of the Final Four NCAA college basketball tournament, Thursday, April 4, 2019, in Minneapolis. (AP Photo/David J. Phillip)

MINNEAPOLIS (AP) — It has been nearly two decades since Mateen Cleaves and the rest of the Flintstones carried Michigan State to the national championship, triumphing over Florida at the long-since demolished RCA Dome in downtown Indianapolis.

Nearly two decades since anyone in the Big Ten hoisted the trophy.

The Spartans are back at the Final Four this weekend, their seventh attempt at giving coach Tom Izzo a validating championship ring. But even if they're unable to end their league's maddening drought at the glitzy new U.S. Bank Stadium on Monday night, the team that does emerge — be it Virginia, Auburn or Texas Tech — will have a coach that followed the Big Ten blueprint.

Brutally tough defense. Efficient offense. Physical inside, smart outside. Limit turnovers and crash the boards and basically play like it is November on the gridiron.

"There's a little flavor," Izzo acknowledged, "in a lot of ways."

That remains the way Izzo's teams play. But in some respect, it's the way all the Final Four teams play, a byproduct of the coaching that their own coaches received through the years.

Virginia's Tony Bennett learned the game at the hip of his father, Dick Bennett, who led Wisconsin to a surprising Final Four in 2000 — coincidentally, the Spartans ended the Badgers' run.

"I adopted his first tape," Pearl said, "and in many ways still keep some of those same principles. I would say Dick taught me, through clinics and tapes, a lot of how we try to guard."

The rest he learned from Davis, who took the Hawkeyes to the Elite Eight with Pearl on his staff. Those were the teams of B.J. Armstrong and Roy Marble — seven players from that season would reach the NBA, a then-unheard-of number that speaks volumes of the Big Ten's decade of dominance.

By the way, those instructional tapes? The younger Bennett can't help but chuckle at them.

"I was like, 'Why do we have to do these instructional videos?'" he said this week. "My dad, he's just an open book, as they say. He's so honest. He just wants to help the game because the game's been so good to him. I have said this before, you don't have to share everything. Obviously people pick and choose. But he absolutely has influenced a lot of people."

That goes for most of the coaches during the Big Ten's glory years.

Longtime Purdue coach Gene Keady was a guiding influence on current coach Matt Painter, whose team was a last-gasp basket away from beating Virginia to reach the Final Four.

Izzo will speak until breathless of the lessons he learned under Michigan State's Jud Heathcote, not only the X's and O's of the game but how to influence and inspire.

That guy for Texas Tech coach Chris Beard was Bob Knight, the irascible but nonetheless brilliant coach who guided Indiana to three national championships. Beard hooked up with him when Knight was hired to rebuild the Red Raiders, but the lessons he learned were steeped in Big Ten blood.

"Coach Knight was one of the best defensive coaches in the history of the game," Beard said. "It's just been my upbringing in basketball as a player and a coach. It's who you are. It's in our DNA."

The similarities between Texas Tech and Michigan State — who meet in the second semifinal Saturday night — are so extensive that they might as well watch scouting film of themselves.

"Their culture, toughness, everything they believe in, we do too," said bruising Texas Tech forward Norense Odiase. "They are a great rebounding team and they are good in transition."

All of which Izzo takes as a compliment.

"We kind of clone each other in some ways, yet I think Chris has done a great job with his team," he said. "We're both disciplines of Bob Knight and Jud Heathcote. Those two guys were best friends. Chris and I are getting to know each other, but I have great respect for what he's done."

Izzo gets nostalgic when he talks about the Big Ten's golden age, when Clem Haskins presided over Minnesota and Lou Henson led Illinois. Three programs won a combined five national championships during one 14-year span in the 1970s and '80s, though that success seems so long ago.

Seven different Big Ten schools have made a combined 13 trips to the Final Four since the Spartans won their last championship. Three times, the league has had multiple Final Four participants.

There's only one this year. But in some ways, it seems like there are four.

"To be a Final Four team, you usually have to have those kinds of qualities of togetherness and toughness, both mental and physical," Izzo said. "But if we could carry the mantle for our league and end that drought, I'd be double excited, one for Michigan State and one for the Big Ten."