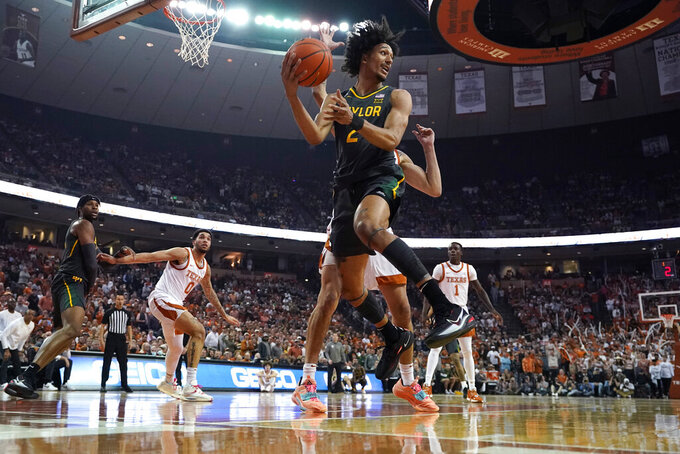 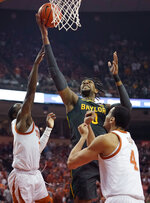 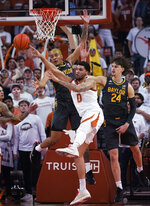 Adam Flagler and James Akinjo each scored 19 points and No. 3 Baylor pulled away late for a tough 68-61 win over No. 21 Texas on Monday night, quieting a raucous sellout crowd of more than 16,000 in the final men's basketball game at the 45-year-old Frank Erwin Center.

Flagler scored 16 in the second half behind four 3-pointers, while Akinjo provided the scoring punch and key ballhandling late for the Bears (25-5, 13-4 Big 12). Akinjo also had eight rebounds and seven assists.

Arena security was braced for another attempt by Texas fans to rush the court after a win, only to watch them start heading for the exits throughout the final minute.

“This is a really tough team. ... It feels good whether it was the last game or not,” Akinjo said after Baylor earned a regular-season sweep in the rivalry. “It’s always tough to win on the road in the Big 12.”

Baylor also got 13 points from Kendall Brown and 12 from Flo Thamba.

Flagler made consecutive 3-pointers to give Baylor its first lead of the second half at 40-39. Texas (21-9, 10-7) tied it 54-all on Christian Bishop's tough layup in traffic with just over five minutes to play before Flagler answered with a twisting layup, then a 3-pointer to push the Bears' lead to five.

“I just had to make the shots at the end of the day. I got a lot of wide-open looks,” Flagler said.

After Texas called a timeout, forward Timmy Allen got too close on a layup and hit the underside of the rim. Another Baylor basket and two free throws from Akinjo pushed the Bears' lead to 63-54 with just under two minutes left. Baylor held Texas scoreless for nearly five minutes in building the lead.

The Bears put the game away by going 7 of 8 at the free-throw line over the final 1:53.

“We put a lot of emphasis on the last five minutes of the game. We pride ourselves on buckling down and just being the tougher team out there. We’re all connected,” Flagler said.

Bishop and Marcus Carr each scored 13 points to lead Texas.

“I know our players and our team wanted so badly to try to win this game for people other than ourselves,” Texas coach Chris Beard said. “We really wanted to win tonight for fans. This was personal.”

Baylor: The Bears shot up the rankings from No. 10 to No. 3 after last week's Nos. 1-6 all lost on Saturday. Now it's all about how the defending national champions finish the regular season and perform in the Big 12 Tournament if they hope to get a No. 1 seed in the NCAA Tournament. That could include a possible path to the Final Four through the San Antonio regional, just a 3-hour drive from their campus.

Texas: The Longhorns are leaving the Erwin Center after this season for the new $340 million Moody Center being built on campus now. Texas is 549-143 all-time in the building nicknamed “The Drum.” The new arena will be cozier, with basketball seating at about 10,000 compared to the Erwin Center's 16,450.

Baylor came into the game a half-game behind No. 6 Kansas atop the Big 12 standings and leave with one more win than the Jayhawks. But Kansas has an extra game on the schedule because of a previously postponed matchup with TCU. The Jayhawks will have to play three games over five days to close the regular season, including a meeting with Texas.

Texas outscored Baylor 18-5 in points off turnovers, but the Bears evened that out with a 21-9 advantage on second-chance points off 12 offensive rebounds. ... Baylor has won five in a row over Texas, and 11 of the last 12 meetings.

Texas was just 4 of 23 on 3-pointers. Carr made three of those, the last coming before the final buzzer.

“When you get in the (postseason) and you have a bad shooting night, how are you going to win the game?” Beard said. “There’s other things you’ve got to figure out. ... Their point guard nearly had a triple-double, their shooters made shots.”

Texas plays at No. 6 Kansas on Saturday.