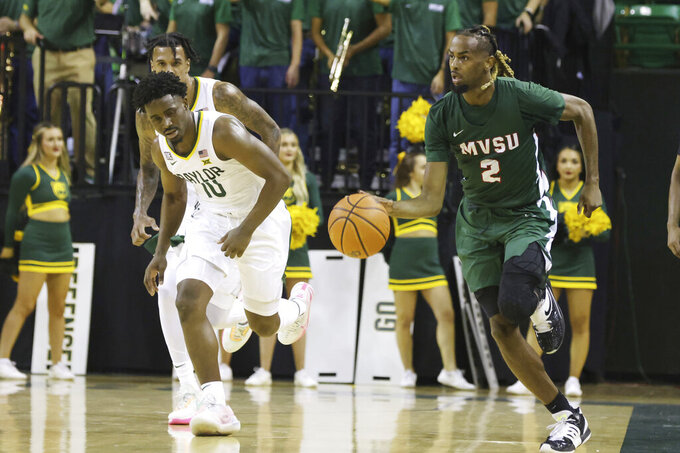 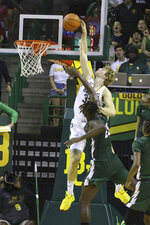 WACO, Texas (AP) — Adam Flagler and the rest of the returning guards were solid for fifth-ranked Baylor in the season opener. So were the touted newcomers, along with everybody else.

Flagler also had eight assists and one of his four 3-pointers started a 24-0 run midway through the first half. LJ Cryer had 16 points and Dale Bonner, another returning guard, had 14.

Langston Love, making his Baylor debut after missing last season with a torn ACL, five-star freshman guard Keyonte George, and West Virginia transfer Jalen Bridges each had 13 points for the Bears, who had 27 assists and only nine turnovers.

“Everybody who played did a good job, so the rotations were working today,” Drew said. “We’re blessed to have a roster full of guys that can help you win. So as competition improves, we’ll have to look and adjust and find out what we need to do better. But, obviously, you can play a lot of different guys."

Love suffered his injury in the first scrimmage before last season. George is a Texas kid who signed out of IMG Academy in Florida.

Flagler and Cryer, who dealt with a surgically repaired right foot most of last season, alternated made 3s twice to open the run, which included six consecutive made 3s in less than five minutes. The Bears led 40-10 when BYU transfer Caleb Lohner made two free throws with 5:44 left in the first half.

“It was a learning lesson for my guys, and we were shorthanded. We’ve got six guys that hadn’t been cleared yet, and they are top guys,” Ivory said. “We’ve just got to play with what we’ve got right now and just keep rolling.”

TAKE CARE OF THE BALL

Baylor’s 27-9 assist-to-turnover rate included only one turnover each by Flagler, George and Bonner. After Flagler’s team-high eight assists, George had seven and Bonner six.

"You’re going to take that every day of the week,” Drew said. “Adam’s done that in our scrimmages and practices. Both he and Dale have been outstanding taking care of the ball. Keyonte’s somebody that sees the floor really well, and is becoming more and more consistent with it as well.”

Mississippi Valley State: Opening against the nation’s fifth-ranked team was going to be a tough task regardless for the Delta Devils, who were 2-26 last season. The best Valley did was tie the game at 2-2 on a field goal by Collins before giving up 11 points in a row.

Baylor: A solid start with a mix of old and new players for the Bears, who won the national title two seasons ago and last season shared the Big 12 regular-season title with Kansas, which gave the league its second consecutive national championship. They shot 51.4% (37 of 72) overall and 41.2% on 3-pointers (14 of 34). ... Flo Thamba, the 6-foot-10 senior forward and only returning starter other than Flagler, had five points and a game-high 10 rebounds.

The game was one of three nationally to start at 11 a.m. Central time, the earliest tip time on the season's first day. The Bears were the only major conference school to start that early, and jumped ahead 13-2 with thousands of screaming elementary school students in the stands.

“I thought the scream game was outstanding,” Drew said, though it kept the Bears from getting into several defensive and offensive sets that coaches were trying to call during the game.

Mississippi Valley State is headed to Hawaii for three games in the Rainbow Classic.

Baylor, which plays its first three games at home, hosts Norfolk State on Friday in a rematch of an NCAA Tournament opener in March that the Bears won 85-49.