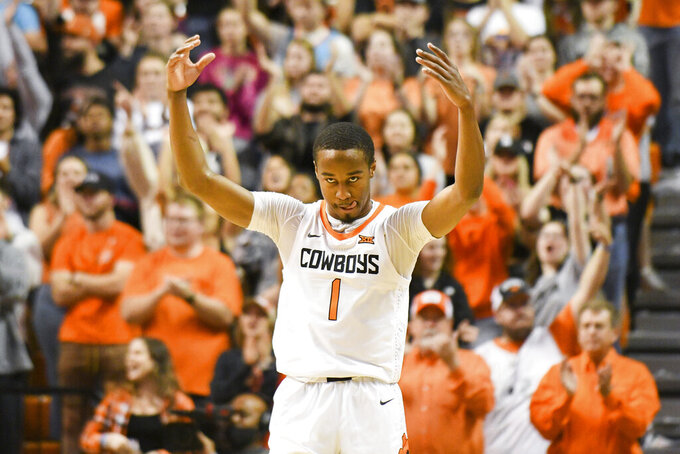 Oklahoma State guard Bryce Thompson (1) gestures to the crowd following a score against Baylor during the first half of an NCAA college basketball game Monday, Feb. 21, 2022, in Stillwater, Okla. (AP Photo/Brody Schmidt)

“James and Adam -- I mean, that’s that’s as good a backcourt as anyone in the country that starts for us,” Drew said.

Flagler missed last Saturday's game against TCU with a knee injury. He made 11 of 20 field goals and 7 of 13 3-pointers in his return.

“Our trainer was the MVP for this game because he was able to get Adam back and able to play, and obviously, he looked pretty good,” Drew said.

“Those are huge, huge plays," Drew said. “Momentum plays. But you can’t leave doubt either. On the road, you get back-to-back calls. I mean, they’ve got to be legit. You’re there. No questions asked. And Adam put itself in that position to get those calls."

Oklahoma State's Isaac Likekele missed a 3-pointer at the buzzer that would have won it.

Neither team scored at the start of the game until a layup by Mayer with 17:32 remaining in the first half. Oklahoma State missed its first nine shots before Likekele's bucket got the Cowboys on the board just over five minutes into the game.

Baylor opened with a 6-0 lead and extended its advantage to 10-2 before Oklahoma State rallied. The Cowboys took their first lead, 21-20, on a pullup jumper by Thompson.

Flagler scored 15 points for Baylor on 6-fot-7 shooting in the first half, but his teammates went 6-for-24.

Baylor’s zone defense bothered Oklahoma State early in the second half and allowed the Bears to rally. A 3-pointer by Flagler from straight away gave Baylor a 49-45 lead.

The game remained tight the rest of the way, and Oklahoma State a possession in the final minute with the score tied at 60. Likekele appeared to throw in a possible game-winning circus shot from behind the basket with less than a second remaining. The crowd erupted and the Cowboys celebrated. Upon review, it was a shot clock violation, and the game went to overtime.

Likekele never thought he got the shot off in time.

“I just grabbed the ball and I just and chucked it at the hoop," he said. “All of a sudden, I’m looking at the clock and they counted it as good."

Drew said it was a good officiating crew that made the right call. He didn’t think the shot would count, but he said strange things can happen.

“We’ve all been in those things where you disagree and then they say game over and everyone runs on the floor," he said.

Baylor: The Bears couldn't afford to lose this one, especially since they lost to the Cowboys earlier this season. This was a gritty win for Baylor, which has won two of three since losing leading rebounder Jonathan Tchamwa Tchatchoua to a season-ending knee injury.

Oklahoma State: It was Oklahoma State's fifth overtime game this season. The Cowboys fell to 3-2 in them. They have been tough throughout the season, despite being banned from postseason play.

Likekele reached 1,000 points for his career. He is the 44th Oklahoma State player to reach that milestone. He entered the game with 988 points and finished with 12.