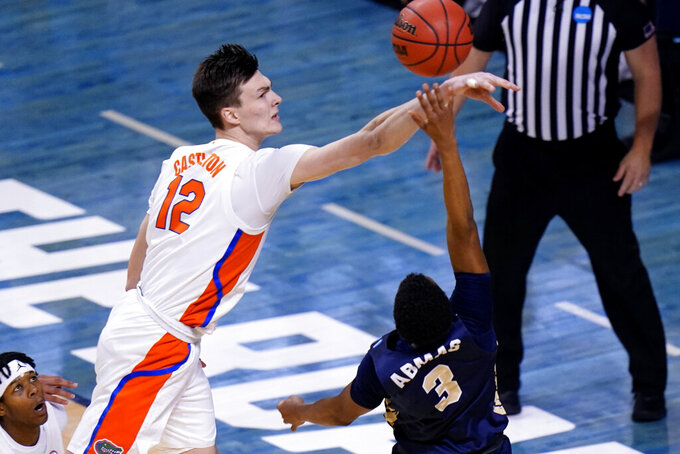 Florida forward Colin Castleton (12) blocks a shot by Oral Roberts guard Max Abmas (3) during the second half of a college basketball game in the second round of the NCAA tournament at Indiana Farmers Coliseum, Sunday, March 21, 2021 in Indianapolis. (AP Photo/AJ Mast)

The 6-foot-11 forward said he will not hire an agent and will retain his college eligibility. The junior averaged 12.4 points, 6.4 rebounds and 2.2 blocks a game. His average swats rank as the fifth-best single-season mark in school history.

Castleton, who transferred to Florida after spending two years buried on Michigan's bench, was at his best in the NCAA Tournament. He had 19 points and 14 rebounds in a win against Virginia Tech and 14 points and 10 boards in a loss to Oral Roberts. He had three blocks in each game.

If he does end up leaving Florida, his departure would create an even bigger hole for coach Mike White.

Florida could have more losses ahead. The Gators await word on guard Scottie Lewis and forward Keyontae Johnson. Lewis could test the NBA waters or transfer, and there's been no indication that Johnson will be cleared to play again at Florida. He was hospitalized after collapsing during a game in early December and ruled out for the season. The cause of his collapse has yet to be revealed.