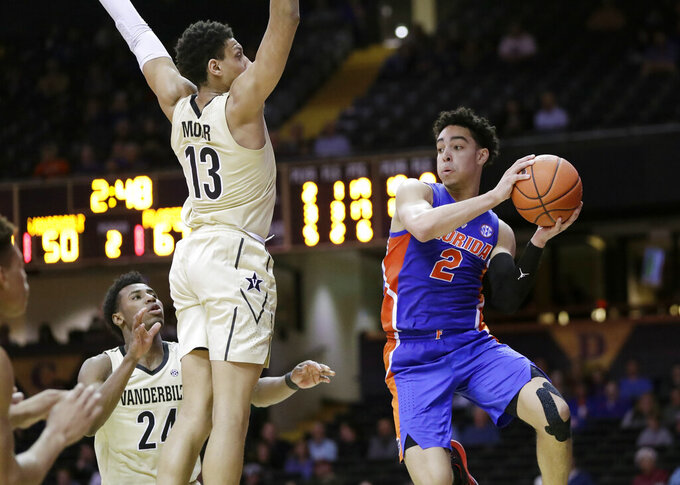 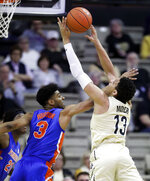 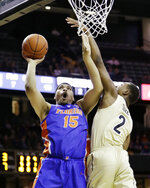 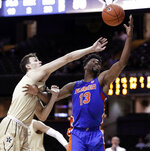 NASHVILLE, Tenn. (AP) — Mike White finally knows what it's like to leave Memorial Gym with a victory.

The Florida coach had lost his first nine trips to the Southeastern Conference's oldest gym as a player at Mississippi, then an assistant coach and even his first three with the Gators. He had company with nobody on the Florida roster having won in this gym.

"I just told my staff a lot of tough memories in this place for a long time," White said. "I started coming in here at 18 years old, I got a lot of respect for this place and this program, and it's great to break through. Way happier though for our seniors, especially our four-year seniors in Kevarrius Hayes and KeVaughn Allen who broke through and get a chance to say they got one here. And it's nice for Jalen Hudson as well who also played very well."

The Gators (17-11, 9-6 Southeastern Conference) also swept Vanderbilt with their first victory at Memorial Gym since 2014. Nembhard hit his first six shots in his first game inside Memorial, and he had 12 by halftime.

"It was very comfortable out there," Nembhard said.

Hudson added 17 points, and Hayes had 14 for the Gators.

"The slow start really hurt us again," Vanderbilt coach Bryce Drew said. "We changed the lineup hoping we'd get some energy to start. Credit Florida hit some shots early, got them off to a good start and really thought Nembhard had a sensational game, really had great pace in the ball screen, really made good decisions and used his body well."

Saben Lee led Vanderbilt with 15 points, and Simisola Shittu and Matthew Moyer each added 10. Aaron Nesmith, Vandy's leading scorer in SEC play, was held to six points after having 26 against the Gators in Gainesville on Feb. 13.

Nembhard scored seven of the Gators' first nine points, including an opening 3 that put Florida ahead to stay, and the Gators led 25-12 midway through the half. Vanderbilt finally knocked down some shots, and Moyer's 3 pulled the Commodores within 34-27 with 2:20 left. Allen answered with a 3 as the Gators finished the half on a 7-2 run for a 41-29 halftime lead.

Vanderbilt fought back with a 12-4 run and pulled within 54-44 on a 3-pointer by Lee with 10:25 left. The Gators scored the next nine points and pushed the lead back to 18 down the stretch.

Florida: The Gators absolutely needed this victory ahead of a tough closing week featuring a visit from No. 13 LSU and a trip to Rupp Arena to play No. 4 Kentucky. Now they've got their longest winning streak in league play since winning eight straight in 2016-17.

Vanderbilt: Points off turnovers has been among the Commodores' biggest issues during this skid. The Commodores came into this game being outscored 249-129 just during the past 15 games, and they found themselves outscored by turnovers once again 17-4. Now 8-9 at home, they will need to beat Arkansas in the home finale to salvage a .500 record for the second time at Memorial Gym. They've never had a losing season on their home court.