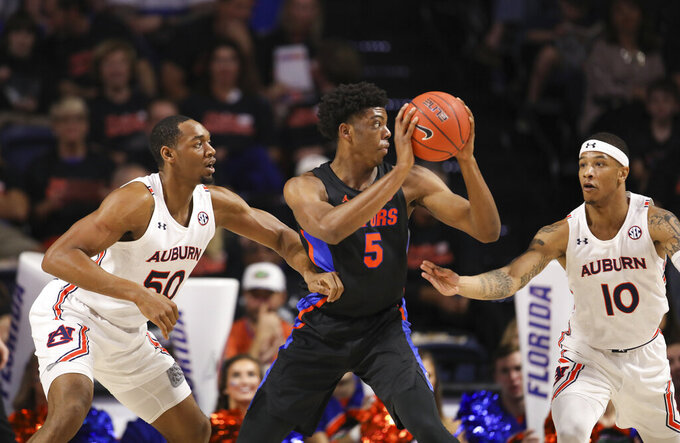 Here are a few things to watch as most Southeastern Conference schools face off against the Big 12 in the annual Big 12/SEC Challenge:

A lot of attention will be focused on Gainesville and whether host Florida (12-6, 4-2) can upend top-ranked Baylor. The Gators are 2-16 all-time against the No. 1 team in The Associated Press poll, but an upset could result in an eighth team atop the rankings next week. Florida lost 84-82 at first-place LSU on Tuesday night but seeks its second victory over a top-five team in three games after upsetting then-No. 4 Auburn last weekend. Other notable pairings include Tennessee visiting No. 3 but short-handed Kansas in Allen Fieldhouse. The Jayhawks will be without forwards Silvio De Sousa and David McCormack following suspensions Wednesday by the school and Big 12 Conference for their involvement in Tuesday night’s bench-clearing brawl at the end of their 81-60 victory against rival Kansas State. No. 15 Kentucky visits No. 18 Texas Tech with the Wildcats seeking to go to 5-0 lifetime against the Red Raiders, last year's national runners-up. No. 16 Auburn hosts Iowa State while Missouri visits No. 14 West Virginia. Defending league champion LSU, 6-0 in SEC play, seeks its eighth consecutive victory when it visits Texas.

Alabama is one of three teams lurking just two games behind LSU. The Crimson Tide (11-7, 4-2) have won three consecutive games and four of five, including last week’s 83-64 rout of then-No. 4 Auburn. After hosting K-State, Alabama and the SEC’s top offense (83.1 points per game) will try to gain ground next week at LSU, which is second in scoring at 80.2. Alabama also hosts Arkansas.

Vanderbilt's 23-game SEC regular season losing streak is just one shy of the conference record set by Sewanee from 1938-40. Last weekend against Tennessee, the Commodores missed all 25 3-point attempts to end their streak of 1,080 games with at least one made 3 since the NCAA implemented the arc during the 1986-87 season. ... During its current seven-game winning streak, LSU’s last five victories have been decided by a total of 13 points. ... Auburn ended a two-game skid by making 10 3-pointers in Wednesday’s 80-67 win over South Carolina after combining for just 11 from deep against Alabama and Florida. ... Kentucky sophomore guard Immanuel Quickley has made 18 of 37 3-pointers over his past seven contests and is averaging 17.1 points in that stretch.

Mississippi State sophomore forward Reggie Perry has helped the Bulldogs bounce back in a big way after losing their first three SEC games. Perry pulled down 13 rebounds and matched a career high with 26 points for his fourth consecutive double-double Wednesday as Mississippi State beat Arkansas 77-70 for its third straight victory. Perry is the first Mississippi State player to total 20 double-doubles in his freshman and sophomore seasons since Erick Dampier did it in 1993-94 and 1994-95. Perry is averaging a double-double this season, as he leads the SEC in rebounds (10.3) and ranks fifth in scoring (16.9).

LSU visits No. 23 Tennessee on Sunday in a matchup of contenders pursuing top-ranked and first-place South Carolina. The host Volunteers (15-3, 5-5-1 SEC), who resumed their rivalry with No. 3 UConn on Thursday night, are a game behind the Gamecocks and one ahead of the Tigers (14-4, 4-2). LSU has beaten three top-15 schools this season, including Sunday’s 65-59 win over then-No. 11 Kentucky.