Florida loses another as Scottie Lewis opts for NBA draft 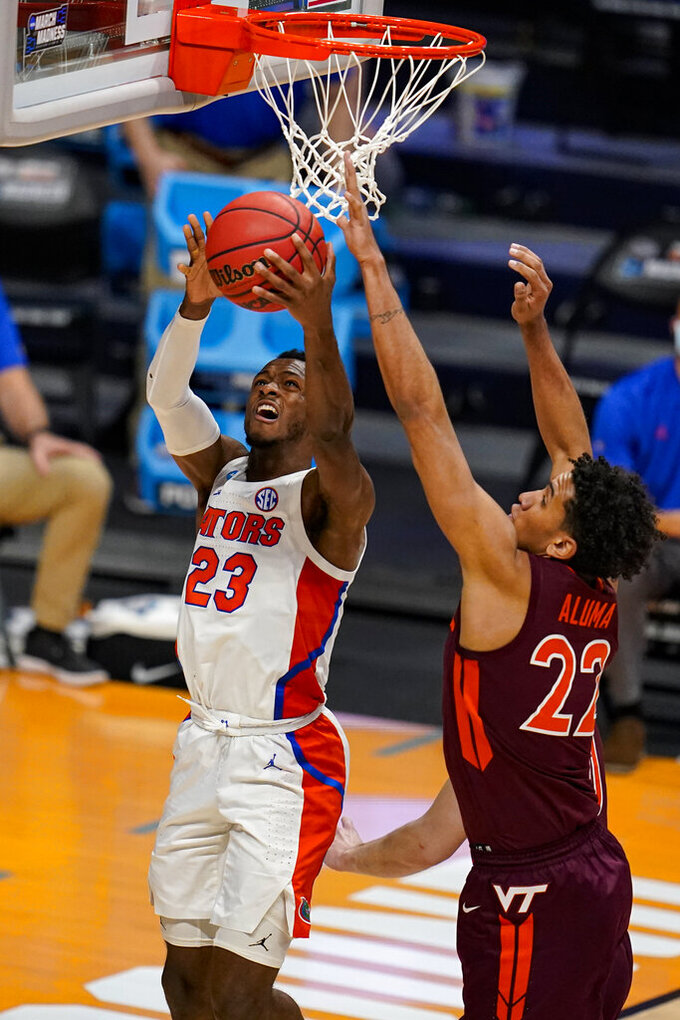 Florida guard Scottie Lewis (23) shoots in front of Virginia Tech forward Keve Aluma (22) in the second half of a first round game in the NCAA men's college basketball tournament at Hinkle Fieldhouse in Indianapolis, Friday, March 19, 2021. (AP Photo/Michael Conroy)

GAINESVILLE, Fla. (AP) — Guard Scottie Lewis became the sixth player to leave Florida's basketball program in a little more than a week when he declared for the NBA draft Thursday night.

Lewis announced on Instagram that he will hire an agent and made it clear he has no plans on returning to school.

“I know that I will be moving on to a new place and if god is willing to a new team but please know that Gainesville and the Stephen O'Connell arena will always have a special place in my heart!” he wrote.

A McDonald's All-American from Hazlet, New Jersey, Lewis started 31 of 51 games in two seasons at Florida. He averaged 8.2 points and 3.4 rebounds and was best known for his defense. He had 69 steals and 58 blocks.

Although he flashed at times, he never came close to reaching the expectations that came with being coach Mike White's top recruit in six seasons. He was ESPN's ninth-rated high school prospect in 2018-19.

He's the latest in growing list of departures in Gainesville and around the country, where teams everywhere are dealing with defections and rebuilds as players take advantage of lenient NCAA transfer rules and a portal that's ballooned to more than 1,200 guys seeking new places to play.

The Gators shouldn’t have much trouble replacing any of the four transfers. Locke was a slow-footed, one-dimensional shooter. Payne, Glover and Osifo were backups who rarely made the Gators better when they were on the floor.

Lewis surely would have had a chance to become the centerpiece of Florida's retooled team next season. Instead, he will work to get drafted.

“From the moment my father placed a ball in my hands, I knew I wanted to strive for nothing but greatness,” he wrote. “Playing in the NBA has always been my main priority in life.

"And with that being said, I am happy to announce that I have made the decision to take the next step in my career by signing with (an) agent and declaring for the NBA draft!"

An outspoken advocate for equality and ending racial injustice, Lewis also thanked his coaches, his parents and his teammates.

He might not be the last to say goodbye.

Forward Colin Castleton, the team’s second-leading scorer, entered his name in the NBA draft to get feedback on his skills. But he did not hire an agent and is expected to return.

Guard Niels Lane and forward Samson Ruzhentsev are still weighing their options, according to the team’s official website.

And it's unclear what the future holds for talented swingman Keyontae Johnson, who has not been cleared to practice or play since collapsing on the court during a game in December. The cause of his face-first fall and his current condition have not been released publicly.

The Gators will be active in the transfer portal to rebuild their roster, especially since White signed just one recruit in the 2021 class: talented guard Kowacie Reeves.