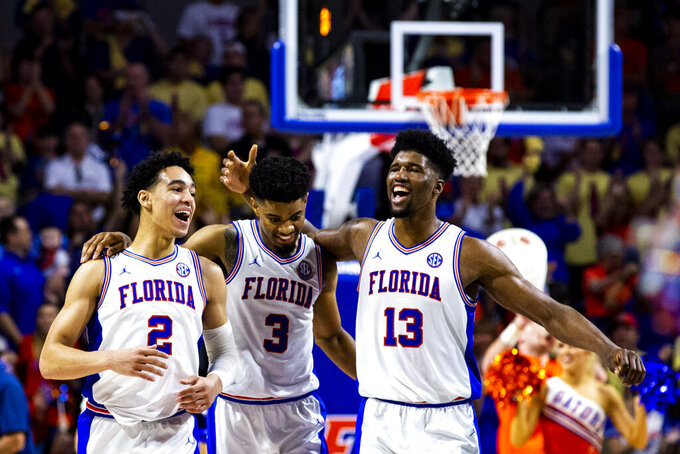 FILE - In this Saturday, Feb. 23, 2019, file photo, Florida's Andrew Nembhard (2), Jalen Hudson (3) and Kevarrius Hayes (13) celebrate during during an NCAA college basketball game against Missouri, in Gainesville, Fla. The Gators are trying to get back to the NCAA Tournament for the third consecutive year. (Lauren Bacho/The Gainesville Sun via AP, File) 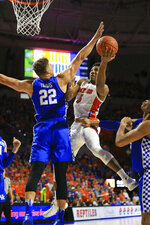 They essentially only had one option.

The Gators (17-12, 9-7 Southeastern Conference) are coming off their most disappointing loss of the season, a 61-55 setback at home to struggling Georgia that ended a five-game winning streak and weakened Florida's NCAA Tournament resume.

With regular-season games remaining against 10th-ranked LSU and No. 6 Kentucky, the Gators believe they need to win one to solidify their spot in the 68-team field. Two losses could leave them watching scoreboards and looking for help during conference tournaments.

It begins Wednesday night against the Tigers (24-5, 14-2) in the O'Connell Center. Florida won the first meeting two weeks ago, a resume-building victory in overtime in Baton Rouge. The Tigers rebounded three days later and beat then-No. 5 Tennessee.

Florida would like to have a similar response on "Senior Night."

Hayes, Hudson and fellow senior KeVaughn Allen will be showered with praise before what they hope will be their final home game. They will be recognized on the court and presented framed jerseys alongside friends and family members.

But it's what happens afterward that concerns coach Mike White more.

"It's frustrating that, for whatever reason, we play with more edge on the road than we do at home," White said. "It's mind-boggling to me. We got one more opportunity to correct that."

White will rely on his three seniors to get it done.

Allen is the team's leading scorer at 12.5 points a game, but the 6-foot-2 guard coming off his worst shooting performance of the season. He was 1 for 10 from the field against the Bulldogs and finished with five points, his fewest in more than three months.

Nonetheless, Allen has been more aggressive late this season. He's demanding the ball in crunch time and driving to the basket more often. He was at his best in overtime at LSU, where he scored 12 of his 21 points in the extra frame. He also hit a huge 3-pointer near the end of regulation to tie Mississippi, which lost in overtime.

Hudson has, too, especially of late.

After failing to find his shot and his confidence for much of the season, Hudson has scored in double figures in six of Florida's last seven games. The 6-foot-6 swingman a key to the team's recent surge.

"It's been good," Hudson said. "Just been grinding. ... Just putting in more work every day, just being consistent in my work and trusting the process has really helped me."

Hayes has been the team's vocal leader, a 6-foot-9 forward who's been arguably more important in the huddle than in the paint. He's a solid defender — he ranks second on the school's all-time shot-blocking list with 203 — but has little progress offensively in four seasons.

Still, he's made strides in the locker room.

"This has become his team," White said. "You know exactly what you're going to get every single day. He's positive energy, high energy, competitive, and he's become a good leader."

Next up for Florida's seniors: getting the Gators back to the NCAA Tournament for the third consecutive year. Beating LSU on "Senior Night" would get it done.

"Our guys understand we've got to have some urgency," White said. "That's the way it should be every game."