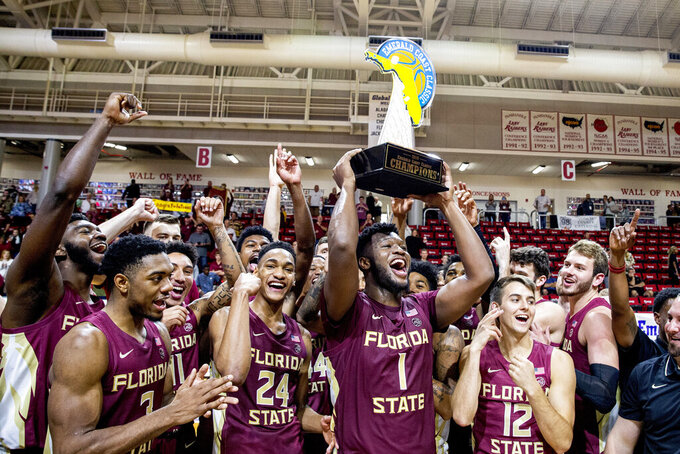 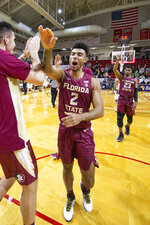 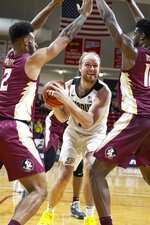 Trent Forrest scored 17 points to lead the Seminoles to the 63-60 overtime victory, but Hamilton was quick to point out that nine other players also scored.

"We won by committee," Hamilton said after receiving the trophy that, appropriately enough, includes an outline of the state of Florida. "Everybody who played I thought made contributions."

The Seminoles (7-1) outscored the Boilermakers 5-2 in the extra period by getting their points at the free-throw line including the final two with only one second left to play.

Purdue (4-3), trailing by only a point, took several potentially winning shots in the last minute but was unable to score against a stifling Florida State defense.

"They make it so difficult on offense," said Purdue coach Matt Painter. "Our defense is definitely ahead of our offense in terms of what we can and what we can't do against quality opponents. We outrebounded them by 15. They are pretty long and athletic. I think that's something we can hang our hat on as a positive."

Devin Vassell was the only other Seminole scoring in double figures with 13 points. That included the final two free throws in overtime after getting fouled when he grabbed a missed Purdue shot.

Matt Haarms led the Boilermakers with 16 points followed by Jahaad Proctor with 12 and Eric Hunter Jr. with 10.

It was a back-and-forth game with 10 lead changes and 11 ties. Florida State never led by more than four points while the Boilermakers briefly went ahead by seven early in the second half after trailing 27-24 at the intermission.

Purdue won the rebounding battle 48-33 but had 24 turnovers to only 13 for Florida State.

It was Florida State's eighth straight overtime victory starting with a 101-90 double-overtime win against Syracuse in January 2018. Forrest, one of only two seniors on the team, has been a part of all those victories.

"He's been in the moment and understands what it takes," Hamilton said.

Forrest did not score in overtime, but he was instrumental in getting the Seminoles there, scoring their last four points in regulation on a pair of driving layups. Each pulled Florida State into a tie. With time running out in regulation, he made another drive but was unable to get a shot off.

Florida State: The Seminoles have been on a roll since opening the season with a 63-61 road loss to Atlantic Coast Conference foe Pittsburgh. They boast a seven-game winning streak that includes two victories against ranked teams, then-No. 6 Florida on Nov. 10 and No. 17 Tennessee in an Emerald Coast semifinal on Friday. That should be enough to move Florida State into the Top 25 ranking, which was just a few votes shy of making it in the current AP poll. The rest of the always tough ACC schedule, though, looms with a home game against Clemson on Dec. 8 after a trip to Indiana on Tuesday.

Purdue: The Boilermakers will have to regroup quickly as they next face No. 7 and defending national champion Virginia on the road. Their trip to the Florida Panhandle, though, did produce some positive results with a 59-56 victory over a ranked team, No. 20. VCU in the tournament's semifinal on Friday.

At 7-3, Haarms was the tallest player on the count while Florida State rotated a pair of 7-footers: 7-1 Balsa Koprivica and 7-0 Dominik Olejniczak. Haarms outplayed both, who scored only six points combined. He also outrebounded them 8-3.

All three are Europeans. Haarms is a junior from Amsterdam, Netherlands; Koprivica hails from Belgrade, Serbia; and Olejniczak calls Torun, Poland, home. While Haarms has two prior seasons at Purdue under his belt, both Florida State seven-footers are newcomers. Koprivica is a freshman and Olejniczak is a graduate transfer student from Mississippi.

Painter notched his 350th career victory when Purdue defeated No. 20 VCU in the tournament's semifinals. It was his 325th win at Purdue. His other wins came at Southern Illinois. His career record is 350-167.

Hamilton has a national record 18 wins over ranked teams while coaching an unranked squad, a result of Florida State's semifinal victory over Tennessee on Friday.

Three of the four top-tier teams in this year's Emerald Coast Classic will participate together in another holiday tournament next November. Tennessee, Florida State and VCU will be part of an eight-team field in the Charleston Classic in South Carolina next year. Oklahoma State, Penn State, Houston, Seaton Hall and the College of Charleston round out the field.

Purdue, meanwhile, will head south of the border to play in the 2020 Cancun Challenge against Clemson, Mississippi State and Illinois State.

Florida State: The Seminoles gets another dose of the Big Ten with a visit Tuesday to Indiana as part of the ACC-Big 10 Challenge.

Purdue: The Boilermakers likewise get another ACC team in the two-conference challenge, traveling to seventh-ranked Virginia on Wednesday for a rematch of their NCAA Tournament Elite 8 game last season that saw the Cavaliers defeat Purdue in overtime, 80-75.