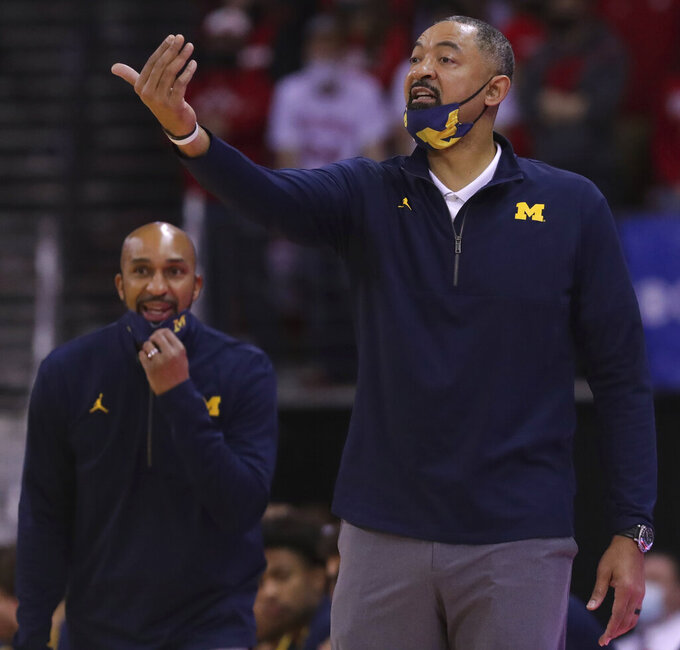 Howard is returning from a five-game suspension as the Wolverines attempt to play their way off the bubble and into the 68-team NCAA Tournament field. Michigan announced Monday that it had reinstated Howard, who served a five-game suspension after hitting Wisconsin assistant coach Joe Krabbenhoft in the side of the head while they were in a postgame handshake line.

“He’s going to come in, he’s going to bring that juice and we’re going to match that intensity,” Michigan guard DeVante' Jones said Sunday after the Wolverines’ 75-69 victory over Ohio State.

Davis, the Big Ten player of the year, got hit in the face by Nebraska’s Trey McGowens while driving to the basket and landed awkwardly early in the second half of the 12th-ranked Badgers’ 74-73 loss to the Cornhuskers. He missed the rest of the game.

“I’m optimistic that he’s going to be fine,” Wisconsin coach Greg Gard said after the Nebraska game. Davis told the Big Ten Network on Tuesday that he's “feeling fine” and “should be ready to go.”

Defending tournament champion Illinois (22-8, 15-5) is the top seed in after winning a share of the conference title for the first time since 2005, when the Illini went on to reach the NCAA Tournament championship game. The 16th-ranked Illini tied Wisconsin (24-6, 15-5) for first place but got the No. 1 seed because of their victory over the Badgers.

Even though his team already has essentially locked up a bid based on the way it performed the last few months, Illinois guard Trent Frazier wants to make sure the Illini approach this week with the mentality they’ll need to have once they begin NCAA Tournament play.

“Our mindset’s got to be we can’t lose no more games,” Frazier said.

“You look at the Thursday games, my God, there's a lot of big games, big matchups on Thursday,” Michigan State coach Tom Izzo said. “I think it's going to be a hell of a weekend of basketball. We'll see who survives.”

Heading into Tuesday’s action, the mock draft consensus according to Bracket Matrix had Michigan as a No. 11 seed, Rutgers as a No. 12 seed and Indiana among the top teams getting left out of the NCAA Tournament field.

That makes Thursday’s Michigan-Indiana matchup particularly compelling. Indiana likely needs to win that game and may have to do even more damage this week to earn a bid.

“I think everyone in the locker room knows how much we need this game,” all-conference forward Trayce Jackson-Davis said. “We know where we stand and we know we have to go get this one.”

Michigan and Rutgers both could have reason to worry if they go one-and-out this week.

While it’s unlikely any Big Ten team will earn a No. 1 seed in the NCAA Tournament, Purdue, Illinois and Wisconsin could play their way into consideration for a No. 2 seed. Bracket Matrix currently projects Purdue and Wisconsin as No. 3 seeds, Illinois as a No. 4 seed, Iowa and Ohio State as No. 6 seeds and Michigan State as a No. 8.

Nebraska struggled so much that athletic director Trev Alberts put out a statement announcing Fred Hoiberg would return next season only after the beleaguered coach agreed to a pay cut.

The Huskers have played much better since that announcement. Nebraska is on a three-game winning streak and closed the regular season by beating Ohio State and Wisconsin on the road. The victory over Wisconsin prevented the Badgers from winning the regular-season title outright.

Nebraska was missing leading scorer Bryce McGowens for the Wisconsin game due to a wrist injury.Hoiberg said McGowens wasn’t a full participant in Tuesday’s practice but expressed optimism the freshman guard would play Wednesday.