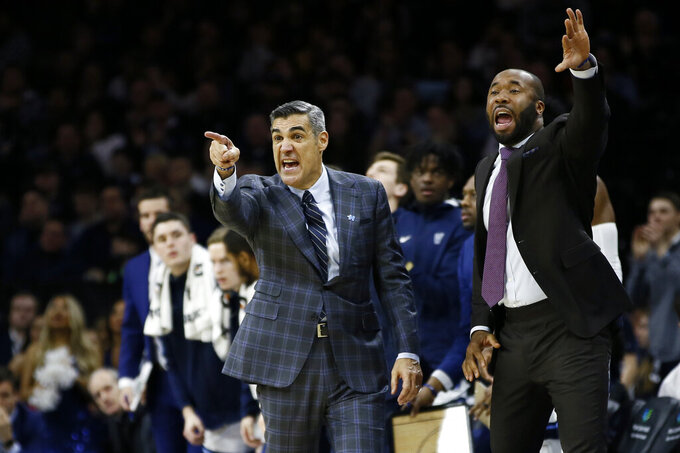 FILE - Villanova head coach Jay Wright, left, and assistant coach Kyle Neptune yell to their team during the second half of an NCAA college basketball game against Creighton in Philadelphia, in this Saturday, Feb. 1, 2020, file photo. Fordham hired longtime Villanova assistant Kyle Neptune on Tuesday, March 30, 3021, to take over a men's basketball program that has had only two winning seasons since joining the Atlantic 10 Conference in 1995. (AP Photo/Matt Slocum, File)

NEW YORK (AP) — Fordham hired longtime Villanova assistant Kyle Neptune on Tuesday to take over a men's basketball program that has had only two winning seasons since joining the Atlantic 10 Conference in 1995.

The 36-year-old Neptune grew up in Brooklyn before attending Lehigh, where he played for four years and was a team captain as a senior.

“This is Fordham’s time. As a native New Yorker, I couldn’t be more thrilled to be coming home at a moment like this, when Fordham men’s basketball is poised to make its mark in the Atlantic 10 Conference and beyond," he said in a statement. "I know this program well and I know its potential to recruit and develop winning young men both on and off the court who will inspire Fordham fans and the entire community.”

Neptune has been an assistant at Villanova under Jay Wright for the last eight seasons. During that time the Wildcats have won two national championships and five Big East titles.

Neptune is the sixth head coach Fordham has had since joining the Atlantic 10. He replaces Jeff Neubauer, who was fired in January, eight games into his sixth season with the Bronx-based school. Neubauer was 61-104 with the Rams. His tenure started with a promising 17-14 season in 2015-16 but trended down every year after.

Fordham's only other winning season as a member of the A-10 came in 2006-07 under former North Carolina State star Dereck Whittenburg.

“Kyle envisions a winning culture for men’s basketball, plans to bring the program to its rightful place on the national collegiate sports stage and will also work to bring Fordham Athletics and the entire University to new heights,” athletic director Ed Kull said.