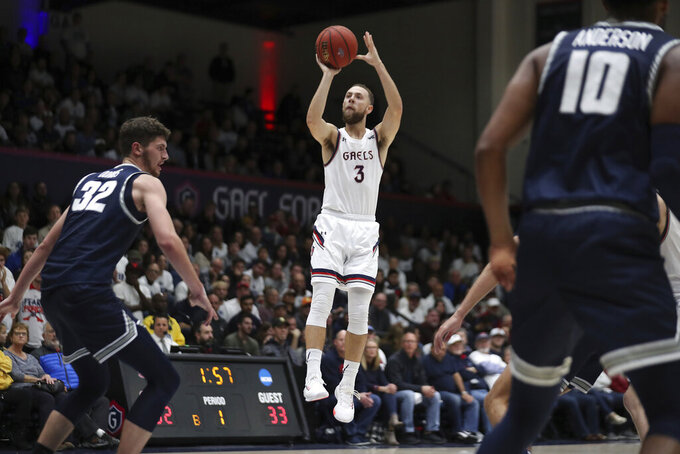 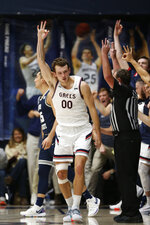 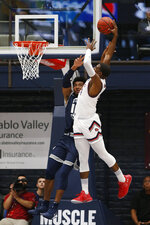 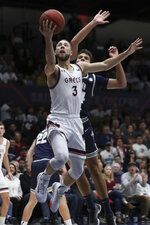 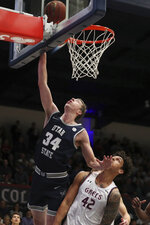 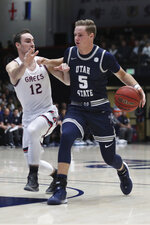 MORAGA, Calif. (AP) — Saint Mary’s doesn’t get a whole lot of chances to match up with the type of opponents that can bolster an NCAA tournament resume, so it’s important that the Gaels take advantage of those opportunities.

Jordan Ford scored 22 of his 27 points in the second half and sparked a run of 11 straight points late in the game to lead Saint Mary's to an 81-73 victory over No. 15 Utah State on Friday night.

“I think it’s really good for our momentum going forward,” Ford said. “That’s a really good team and they got us good last year. It felt really good to beat a top 15 team. It gives us a lot of confidence.”

Ford took the game over in the second half while his teammates struggled to make shots and helped the Gaels (7-1) get their first home win over a ranked team in nearly eight years.

“It was kind of motivation for us when you see the 15 in front of them,” forward Matthias Tass said. “We just wanted to take that 15 out and that's it.”

Justin Bean scored a career-high 24 points and Sam Merrill added 23 to lead the Aggies (7-1), who had been off to their best start since winning their first eight games in 1961-62.

It was a back-and-forth game with 13 ties and 23 lead changes that went down to the last minutes. Utah State had opened a four-point lead before Ford hit a 3-pointer. He then fed Malik Fitts for a dunk that put the Gaels up 66-65 with 3:29 to play on their first basket by someone other than Ford in more than eight minutes.

“He can do that. He can get in a little zone where he just goes,” coach Randy Bennett said about Ford. “I’ve seen it these last couple of years. I've really seen it 10 or 12 times. It’s unlike many guys I coached. ... He can do it at a high level. He can get on a roll and there's not much you can do.”

Bean answered with two free throws to put Utah State back up before back-to-back 3s from Ford and Tanner Krebs sparked the big run that put the game away.

“I regret not calling a timeout,” coach Craig Smith said. “A lot of times we play through that stuff. We had a lot of veteran guys out there with a lot of experience, and usually we answer the bell. They made plays.”

Saint Mary's went nearly six minutes without a basket in the first half before making five straight from the field to take a 32-28 lead on a 9-0 run capped by back-to-back baskets from Tass.

But two late 3-pointers from Merrill gave Utah State a 36-34 lead at the half.

Utah State: The Aggies were in the game until going cold late. They missed eight of nine shots over a span of more than eight minutes late in the second half to come up short against the Gaels.

“I think we settled for some contested shots and kind of fell in love with jumpers there for a while and weren’t attacking,” Bean said.

Saint Mary's: The Gaels get few chances to play top-flight opponents and must make the most of those chances if they want to be in the running for an at-large bid to the NCAA tournament. They opened the season with a neutral site win over Wisconsin and now have a win over a nationally ranked opponent to help make up for a home loss to Winthrop.

The Aggies got a bad break midway through the second half when Diogo Brito got a steal and appeared to have an uncontested layup. But he ran into official Bob Staffen and lost the ball instead. The officials blew the play dead and Utah State kept the ball on alternate possession.