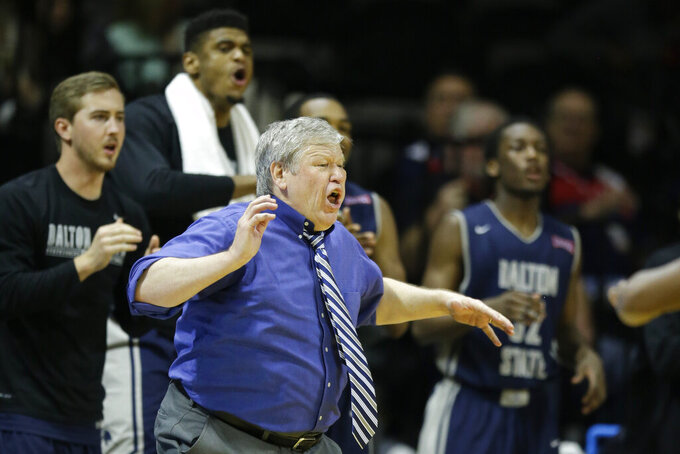 FILE - Dalton State coach Tony Ingle directs his team during the second half of the NAIA championship basketball game against Westmont in Kansas City, Mo., in this Tuesday, March 24, 2015, file photo. Dalton State defeated Westmont 71-53. Tony Ingle, who failed to win a game in his tenure as BYU's interim basketball coach but went on to capture lower-division national championships at two Georgia colleges, has died at the age of 68. His son, Izzy, announced on Twitter that Ingle died Monday night, Jan. 18, 2021, of complications from COVID-19.(AP Photo/Orlin Wagner, File)

ATLANTA (AP) — Tony Ingle, who failed to win a game in his tenure as BYU's interim basketball coach but went on to capture lower-division national championships at two Georgia colleges, has died at the age of 68.

His son, Izzy, announced on Twitter that Ingle died Monday night of complications from COVID-19.

“It’s with a shattered heart I post this,” said Izzy Ingle, the head basketball coach at Timpanogos High School in Orem, Utah. “I’m so blessed to have had such an amazing father & example throughout my life!! I love you dad!! I already miss you!”

Ingle said his father had been placed on a ventilator Jan. 8 after contracting the coronavirus in December.

Known for his sharp wit and self-deprecating style, Ingle was an assistant coach at BYU when head coach Roger Reid’ was fired after a 1-6 start to the 1996-97 season. Ingle was promoted to interim head coach but the Cougars failed to win another game, going 0-19 the rest of the way.

Ingle spent two years as a scout with the Utah Jazz before getting back into coaching at Kennesaw State, a school in suburban Atlanta that was then a member of NCAA Division II.

The Owls won the Division II national championship in 2004, finishing 34-4 and routing Southern Indiana 84-59 in the title game.

“When he arrived, he said he was going to win a national championship for us in five years, and I’ll be darned he won it in four years.,” said former Kennesaw State athletic director Dave Waples. “That run was absolutely amazing. He was one of a kind. He was driven, a great person to be around and has a wonderful family. I can’t stress enough how much we are going to miss him.”

Kennesaw State struggled after making the move to Division I. Ingle's 11-year tenure ended with his firing in 2011 after the Owls went 8-23. University officials cited academic deficiencies in the program as the reason for Ingle's dismissal.

In 2013, Ingles returned to his alma mater, Dalton State in north Georgia, where he had played in the early 1970s. The program was relaunched under Ingle after a 35-year hiatus, going 26-4 in its first season back and winning the NAIA national championship in 2015 to cap a 32-4 campaign.

“I never did coach basketball, I coached people,” Ingle said while talking to children at the Dalton Boys & Girls Clubs in 2019. “I wanted to give back because so much was given to me. What you get is gone when you’re gone, but what you give is your legacy and that lives on.”

A native of Dalton, Georgia, Ingle is survived by his wife Jeanne and five children, including Tony Jr., the girls basketball coach at Kell High School in suburban Atlanta.