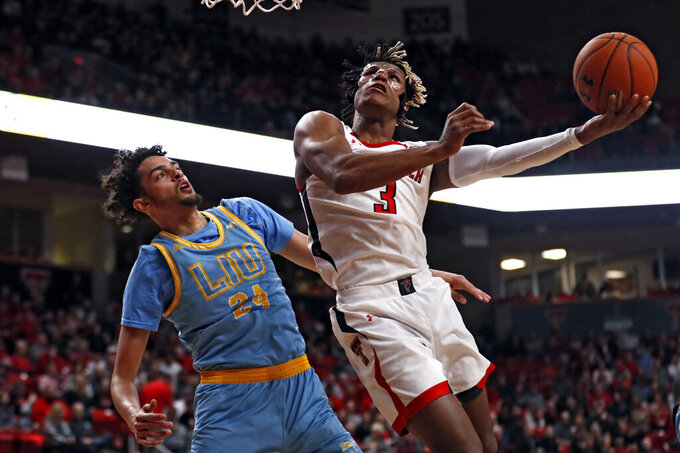 LUBBOCK, Texas (AP) — Freshman Jahmi’us Ramsey isn’t having much trouble adjusting to the college game, and showed some versatility on a key sequence in another non-conference home win for No. 12 Texas Tech.

Ramsey scored a career-high 27 points with a block and rebound after one of his game-high five 3-pointers, and the Red Raiders pulled away after trailing by a point at halftime in a 96-66 victory over Long Island-Brooklyn on Sunday.

Ramsey was 5 of 6 from long range and grabbed six rebounds in the third-highest scoring game for a freshman at Texas Tech (5-0), which lost last season’s championship game in overtime to Virginia and has now won 51st consecutive non-conference home games.

“I think I’ve adjusted to the speed of the game pretty well,” said Ramsey, whose previous high was 25 against Houston Baptist in his third game. “I feel comfortable out there and that’s the most important thing.”

The Red Raiders trailed 42-41 at halftime. The Sharks (1-5) turned it over on their first four possessions of the second half and Davide Moretti put Texas Tech in front for good with a bucket on his way to 12 points.

Raiquan Clark scored 18 points for Long Island but was limited after committing his fourth foul early in the second half. The Red Raiders outscored the Sharks 55-24 after halftime.

“I was happy our guys came out and weren’t intimidated with first of all the Texas Tech team and kind of the crowd and atmosphere, which I thought was second to none,” Kellogg said. “We knew they would turn up the defensive intensity in the second half.”

Ramsey sparked a key sequence by hitting a 3-pointer, getting Texas Tech’s first block at the other end before a rebound led to freshman Terrence Shannon Jr.’s basket in transition for the first double-digit lead for the Red Raiders at 62-51.

“Just really pleased with today’s efforts, especially in the second half,” coach Chris Beard said. “Thought where a lot of teams might buckle or start getting a little passive and nervous and start looking up at that scoreboard, our guys just grinded away.”

Jashaun Agosto hit a 3-pointer at the first-half buzzer to put Long Island in front. He scored 13 points.

Long Island: The Sharks have been competitive in coach Derek Kellogg’s third season. Clark held his own inside in the first half, leading all scorers with 13 points. It was a different story after halftime.

Texas Tech: The Red Raiders haven’t allowed a team to shoot 50% from the field since late in the 2017-18 season. Long Island was right on that number at halftime, but Texas Tech returned to defensive form by holding the Sharks to 33% in the second half.

Behind Ramsey’s leading effort for the Texas Tech freshmen with only three players returning from the national runner-up, Shannon scored 13 points, and freshman Kevin McCullar reached double figures for the first time with 10.

“We’re counting on these guys,” Beard said. “It’s one of the reasons they chose to come here. They knew they wanted to play early in their careers. Nothing’s promised, but it was definitely an opportunity here.”