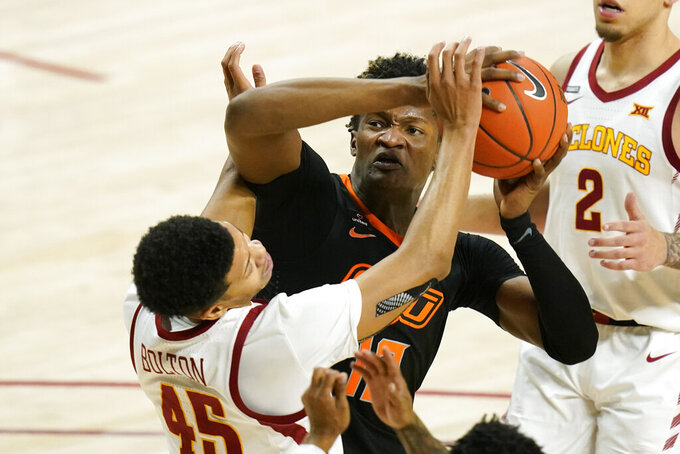 AMES, Iowa (AP) — Freshmen Matthew-Alexander Moncrieffe and Rondel Walker had career games in the absence of star classmate Cade Cunningham and Oklahoma State pulled away from short-handed Iowa State for an 81-60 win on Monday night.

Moncrieffe scored 22 points and grabbed 12 rebounds, both career highs and his second-consecutive double-double, and Walker had a career-high 20 points. Cunningham, the leading scorer in the Big 12 at 17.9 points a game, missed his second game due to COVID-19 protocol but was on the bench.

Iowa State (2-8, 0-6) only had six scholarship players available and only seven players saw action. Among the missing players were the Cyclones' second, third and fourth scorers. Rasir Bolton scored 19 points and Tyler Harris 18 for the Cyclones, who were coming off COVID protocol and had not played since Jan. 9.

The Cyclones bolted to an 13-2 lead with an 11-0 run but Oklahoma State took the lead with a 12-0 run minutes later and ended up with a 41-31 at the half. Moncrieffe and Walker had 12 points apiece at the break.

The Cowboys shot 68% in the second half (17 of 25) and continued to dominate the boards (21-8) but didn't pull away until the last six minutes as they piled up a season-high 24 turnovers.

Oklahoma State is home against Arkansas and Iowa State plays at Mississippi State in SEC/Big 12 Challenge games on Saturday.