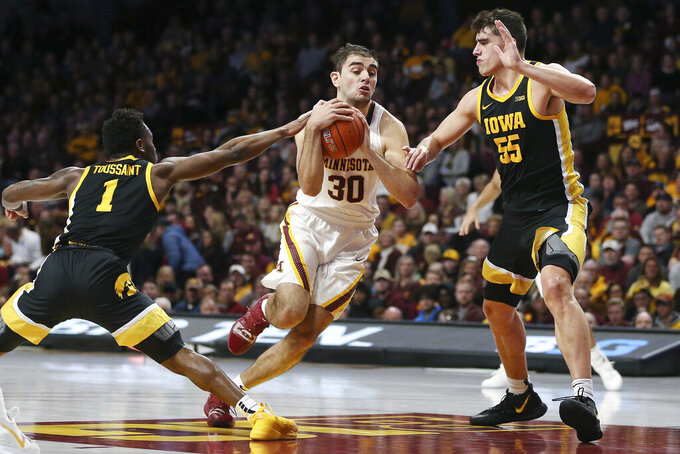 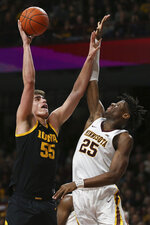 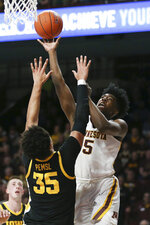 MINNEAPOLIS (AP) — Winning on the road in the Big Ten has proven to be a monumental task for most every team this season. Even trailing by eight points late at Minnesota, No. 21 Iowa believed it was going to shake that trend.

Luka Garza had 24 points and the Hawkeyes closed the game by scoring the final 11 points to rally past the Gophers 58-55 on Sunday.

Minnesota’s Daniel Oturu missed the front end of a one-and-one free-throw attempt with a chance to tie the game with 3.8 seconds left and Iowa (18-8, 9-6) came away with a rare road win. The highest-scoring team in the Big Ten, the Hawkeyes were held to a season-low 58 points.

The Hawkeyes trailed by eight points with 5:25 remaining. The Gophers had five of their 13 turnovers during the final stretch.

“I told everybody we were going to win this game because I had confidence in us and I knew we had enough time to do it” Garza said.

“They all hurt, but obviously this is a rivalry game and we're kind of trying to make a run at the end here,” Carr said. “And to have the game in our hands, it was ours to lose. Yeah, it was pretty tough.”

Bakari Evelyn hit a pair of free throws with 1:15 remaining to give the Hawkeyes a 57-55 lead, its first since leading 21-20 in the first half. Evelyn was fouled right before the shot clock expired.

“I was more disappointed in the composure down the stretch,” Gophers coach Richard Pitino said. “The turnovers, the foul at the end of a shot clock where we had them. That was where I was disappointed. We didn’t want to go win that game when we needed to.”

Iowa's Ryan Kreiner had 10 points in his fourth start of the season with CJ Frederick out because of an ankle injury he sustained in the previous game at Indiana. McCaffrey said Frederick, who’s third on the team in scoring, wasn’t close to playing and said he’s unsure how long he’ll be out.

Garza dealt with foul trouble throughout and said he “tweaked” his ankle early in the game. But he scored at least 20 points in his 11th straight Big Ten game. He scored the first eight points of the game and had Iowa’s first 10 points, becoming just the 12th Hawkeyes player to score at least 600 points in a season.

Iowa should stay ranked after going 1-1 on the road during the week. While No. 23 Creighton won twice, including against No. 10 Seton Hall, No. 22 Illinois lost twice. Texas Tech at No. 24 and No. 25 LSU lost their only games of the week.

Iowa: The Hawkeyes helped their NCAA standing. They started the day 30th in the NCAA NET rankings, the primary tool used to determine the NCAA brackets and picked up their sixth Quad 1 win of the season on the road against Minnesota, ranked No. 40 in the NET rankings.

Minnesota: The Gophers missed a big chance to boost their tournament credentials and they are running out of time for more impressive wins. Minnesota lost its second home game in Big Ten play and now might need to beat Maryland at home on Feb. 26 or Wisconsin or Indiana on the road.

Iowa returns home for one game against Ohio State on Thursday night. The Hawkeyes then go back on the road at Michigan State on Feb. 25.

Minnesota will look to bolster its tournament standing with another home game on Wednesday against Indiana.