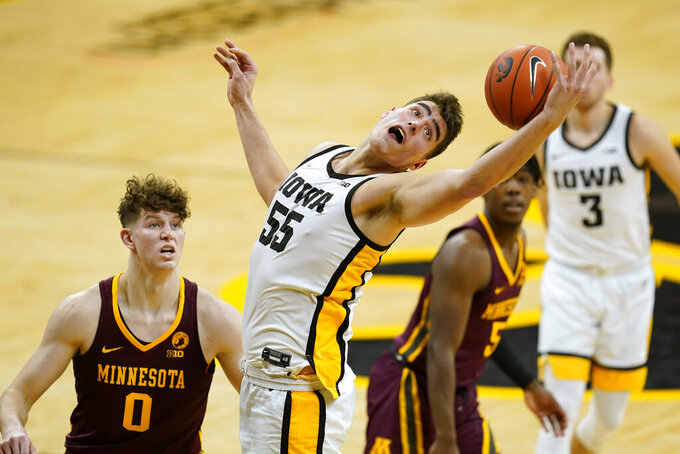 IOWA CITY, Iowa (AP) — Jordan Bohannon knew what was his favorite number was on his final box score.

“You know me, it’s the zero turnovers,” Bohannon said when asked what was his best statistic of the day. “That’s something I always pride myself in, to not turn the ball over. Be steady with the ball and find guys.”

“He has always really been tremendous in our fast break and in our ability to push it,” McCaffery said. “From the opening tip today, he was pushing the ball and finding people. I thought his decisions — when to shoot, when to drive, when to move it, when to get it in the post — were tremendous. Practically perfect."

“If it wasn’t for Luka making his layups, I wouldn’t have 14 assists,” Bohannon said. “I think that more than 95% of my passes were assists to him.”

“Our guards are really unselfish,” Garza said. “When we get out on transition, that’s when we’re at our best. J-Bo was finding me tonight.”

Bohannon missed most of last season because of surgeries on both of his hips. He has scored 74 points in his last four games after totaling 27 in the previous five.

“I’ve been through hell for the last year and a half, two years,” Bohannon said. “It was a lot for me, mentally and physically. It took a lot of internal motivation for myself to get back to the player I know I can be.”

The Hawkeyes led 39-37 at halftime and opened the second half with a 22-6 run. Garza had 10 points in that stretch.

Garza, who came into the game leading the nation in scoring at 27.2 points per game, was 13 of 20 from the field.

“We fought hard to get back within five, which is great,” Minnesota coach Richard Pitino said. “But then we took ill-advised shots. We just took some bad shots down the stretch and couldn’t get stops.”

Minnesota made just 10 3-pointers against the Hawkeyes after having 17 in the first matchup.

“Our loss up there on Christmas night was in the back of our minds,” Wieskamp said. “This one was kind of personal for us. They shot it well at their place, but they were getting open looks. So that was a key emphasis in this game, to get up in their space.”

Both Gach and Marcus Carr each had 13 points for the Gophers. Brandon Johnson had 12. Liam Robbins added 10. Carr had 30 points and Johnson had 26 against the Hawkeyes earlier this season.

Iowa won its fourth consecutive game and stayed within a half-game of the Big Ten lead. Minnesota, which went undefeated in nonconference play, lost for the third time in four games.

Iowa: At home against No. 23 Michigan State on Thursday

Minnesota: At home against No. 10 Michigan on Saturday.