Garza's return puts No. 5 Iowa in position for big step up 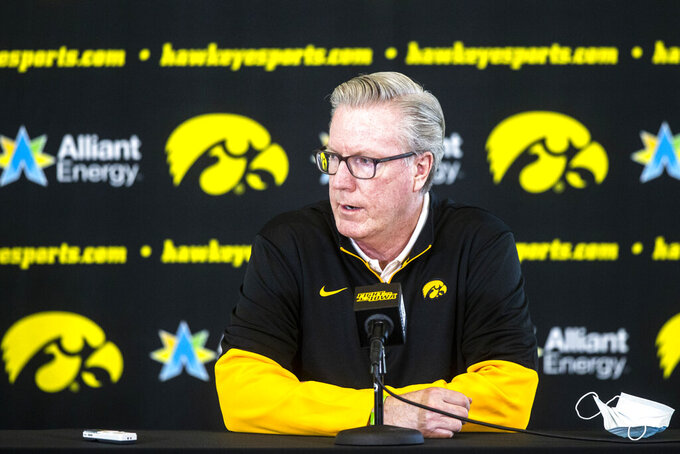 IOWA CITY, Iowa (AP) — The wait took a little longer, but Iowa got Luka Garza back.

The consensus All-American took his time deciding to return for his senior season after the NBA draft process was extended into the summer. When Garza took his name out of draft consideration in early August, the Hawkeyes were immediately considered a national championship contender.

Iowa coach Fran McCaffery said his team embraces the expectations, which include a No. 5 ranking in t he Associated Press preseason poll after the Hawkeyes went 20-11 overall and tied for fifth in the conference at 11-9.

“You have to enjoy it. I think they do,” McCaffery said. “But they also understand it and respect it."

That's because six other Big Ten teams are ranked heading into the season, and the Hawkeyes also are scheduled to play No. 1 Gonzaga in December.

“We know what’s before us, but I think that’s the fun of it essentially,” McCaffery said.

The 6-foot-11 senior ended the season scoring 20 or more points in 16 consecutive Big Ten games, the longest streak in the conference since 1987.

“Coach McCaffery saw something in me that a lot of others didn’t, and he took a chance on me,” Garza said when he announced he was returning. “I feel like he’s done so much for me and my career, it wouldn’t be right to not finish off what I started here.”

Though Iowa has considerable depth and multiple ways to score, McCaffery knows opponents will make controlling Garza the primary focus.

“I think he’s already proven that he can handle that game in and game out,” McCaffery said. “The guy is just relentless, and that’s why he’s great.”

Iowa returns all five starters. Fifth-year senior guard Jordan Bohannon and sophomore forward Jack Nunge are back after season-ending injuries and both have starting experience as well. The eight returning players for the Hawkeyes have combined for more than 11,000 minutes of playing time.

“We’re much deeper, substantially deeper,” McCaffery said. “We’ve got veteran guys coming back who have produced at this level, but at the same time it won’t change in terms of our ability to share the ball. It’s a very unselfish group.”

Iowa adds five freshmen, and in a normal season McCaffery might sit one or two players for a redshirt season. But with the COVID-19 pandemic, McCaffery knows depth is going to be important.

Joe Wieskamp upped his production last season, and McCaffery is looking for more after he averaged 14 points and 6.1 rebounds and led the Big Ten in free-throw accuracy at 85.6%. McCaffery said Wieskamp has gotten stronger and worked on his ball-handling and shooting.

“He’s just going to be a really aggressive offensive player in his junior year,” McCaffery said, “and now he’s physically ready to be one of the elite players in the country.”

Bonhanon has built a reputation for making big shots — he has 284 3-pointers in his career and needs 91 this season to become the all-time leader in the Big Ten. He played 10 games last season before undergoing hip surgery in late December.

IT’S BEEN A LONG TIME

Iowa’s last Big Ten regular-season title was in 1979, and the last Final Four appearance was in 1980. All that seems possible for this team.

“They’re a special group of young people that truly love each other,” McCaffery said, “and they put the time in, and when you see a group work as hard as they have, you want them to succeed in a way that’s special, and that would be a championship, whether it be a regular season or a tournament championship. A run in the NCAA Tournament is obviously what we all want.”

Iowa’s complete schedule hasn’t been released, but the Hawkeyes do get No. 1 Gonzaga in Sioux Falls, South Dakota, on Dec. 19, as well as an ACC/Big Ten Challenge game at home against No. 16 North Carolina.

“That’s why you come to Iowa, because you want that competition and you want that challenge,” McCaffery said. “I think, like I said earlier, you embrace it and you enjoy it, you don’t run from it.”