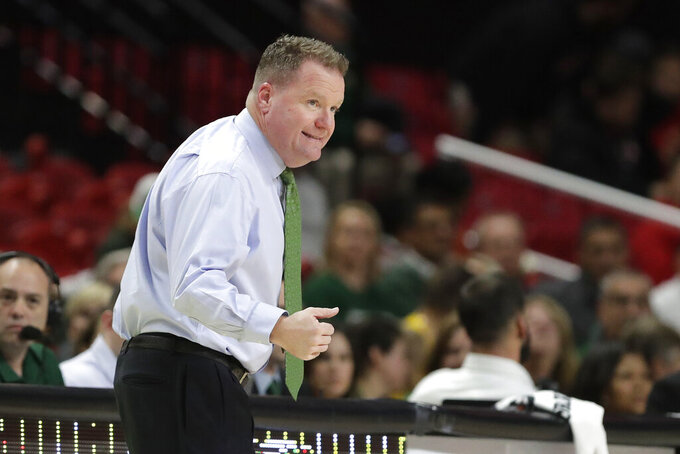 FILE - George Mason coach Dave Paulsen talks to his team during the first half of an NCAA college basketball game against Maryland in College Park, Md., in this Friday, Nov. 22, 2019, file photo. George Mason fired men’s basketball coach Dave Paulsen after six seasons, Tuesday, March 16, 2021. The team had four winning seasons but never made the NCAA Tournament or NIT during Paulsen’s tenure and had a 95-91 record. (AP Photo/Julio Cortez, File)

FAIRFAX, Va. (AP) — George Mason fired men’s basketball coach Dave Paulsen on Thursday, ending his tenure after six seasons that did not include an NCAA Tournament or NIT appearance.

The team had four winning seasons under Paulsen and went 95-91 with a 47-57 record in Atlantic 10 Conference play. The Patriots were 13-9 this past season and lost in the quarterfinals of the A10 tournament.

“After an extensive review and evaluation of our men’s basketball program, I have decided to make a change in our leadership," athletic director Brad Edwards said in a statement. “I am grateful for Dave’s commitment, tireless work and leadership in directing our program over the past six years. He did an admirable job in stabilizing our program."

Paulsen had one year remaining on his contract, which was previously extended. George Mason's best season with him at the helm came in 2016-17 when it won 20 teams and played in the CBI Tournament.

The school said a national search will be conducted for Paulsen’s successor.

"Every decision he has made centers around the well-being of our student-athletes and what is best for them both academically and athletically," Edwards said. “Dave has represented our university and athletic department in a first-class manner and is very well-regarded among his peers in the basketball community.”