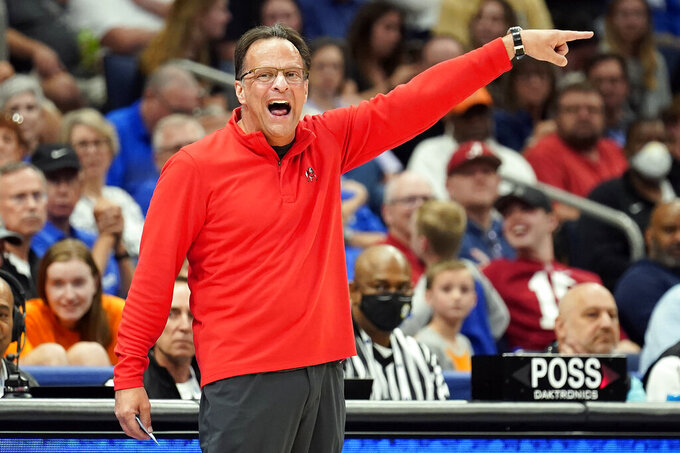 Georgia coach Tom Crean calls a play against Vanderbilt during the first half of an NCAA college basketball game in the Southeastern Conference men's tournament Wednesday, March 9, 2022, in Tampa, Fla. (AP Photo/Chris O'Meara) 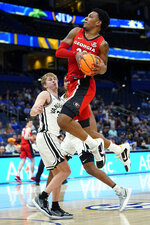 Georgia coach Tom Crean has been fired in a much-anticipated announcement a day after the end of a 26-loss season.

Georgia announced Thursday night Crean will not return for his fifth season. The quick decision comes less than 24 hours after the Bulldogs' 86-51 to Vanderbilt in the first round of the Southeastern Conference Tournament in Tampa on Wednesday night.

Georgia (6-26) set a school record for most losses in a season while losing its final 12 games. The Bulldogs won only one SEC game, setting another low for the program.

Crean was 47-75 overall and 15-58 in SEC games in four seasons. He was been unable to duplicate the success he enjoyed at Marquette, where he advanced to the Final Four, or Indiana, where he coached three Sweet 16 teams.

Georgia athletic director Josh Brooks thanked Crean and his family for their commitment to the program and said Crean “demonstrated unquestionable effort and enthusiasm in what he has attempted to accomplish at Georgia.

“That said, our expectation is to compete for postseason success in all 21 sports,” Brooks said in a statement released by the school. "We believe a leadership change in men’s basketball is needed to achieve our goals.”

Crean was unable to find a way to prevent the free fall of 20 losses in the final 21 games of the season.

When asked if he had addressed his job status with his players before Wednesday night's game, Crean said: “You know what? Anything with my situation, that’s got to go through the athletic department, right? That’s not a thing I spend a lot of time on and I just coach my team every day. That’s what my focus is.”

The buyout clause in the six-year, $19.8 million contract Crean signed in 2018 decreased from $7.2 million to $3.2 million with the end of the season.

Crean couldn’t overcome the inability to keep his best players in the offseason. Georgia’s two leading scorers from last season transferred to other SEC schools — point guard Sahvir Wheeler to Kentucky and guard K.D. Johnson to Auburn. Yet another player who could have played a key role this season, Tye Fagan, transferred to Mississippi.

The losses of the three players through the transfer portal was devastating. Georgia then lost two players to season-ending knee injuries.

The Bulldogs’ only returning starter, forward P.J. Horne, was hurt before the season. Jailyn Ingram averaged 10.7 points and six rebounds through nine games before hurting his knee in early December. Crean said he didn’t have a true power forward the remainder of the season. As a result, the Bulldogs plummeted to the bottom of the SEC standings.

Crean’s highlight at Georgia was signing Anthony Edwards, who became the NBA’s No. 1 overall draft pick by Minnesota in 2020 following one season in Athens. But even with the dynamic talents of Edwards, Georgia finished only 16-16 overall and 5-13 in the SEC in the 2019-20 season.

Crean said the coronavirus pandemic, which dramatically cut down on in-person visits, shut down his opportunity to take advantage of the recruiting boost he would have otherwise expected from having a Georgia player selected as the NBA’s top draft pick. Instead, Crean increasingly was forced to rely on transfers.