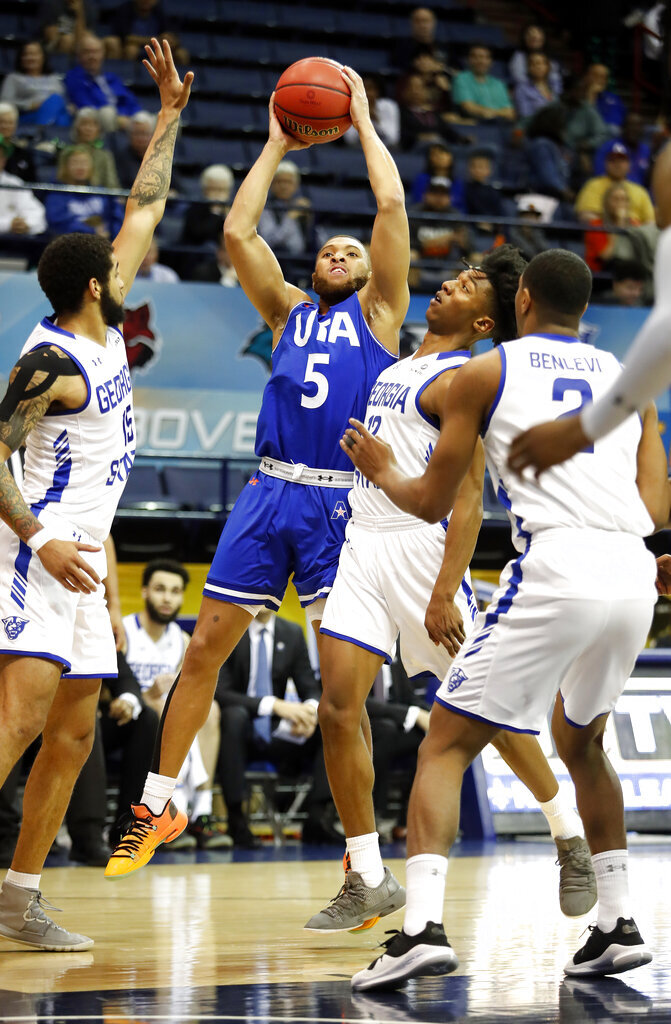 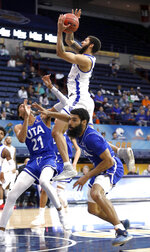 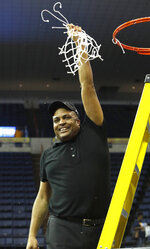 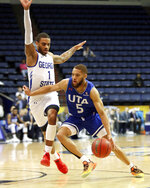 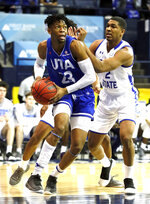 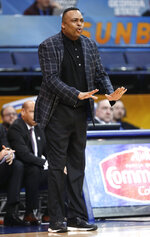 He had a six-hour party to attend, he said, referring to the bus ride back to Atlanta from New Orleans.

Malik Benlevi scored 16 points and grabbed 11 rebounds, and Georgia State advanced to a second straight NCAA Tournament with a 73-64 victory over Texas-Arlington in the Sun Belt Conference Tournament final on Sunday.

The top-seeded Panthers (24-9) also demonstrated they are no longer the one-man show they were a year ago, when they relied on D'Marcus Simonds' 27 points to win the 2018 conference title game. This time, Simonds was held to 10 points, but Georgia State had the balance to withstand that. Benlevi punished UTA from outside with four 3-pointers, while Damon Wilson scored 13 points, Kane Williams 12, and Jeff Thomas 11, putting all five starters in double figures.

"We are a dangerous team to play because of how we play," Hunter said. "What people are doing, they're game-planning for D'Marcus and it's the wrong thing to do. I've got good players.

"That's why I hope whoever we're playing in the NCAA Tournament, they're doing the exact same thing."

Edric Dennis scored 12 points and Brian Warren 11 for Texas-Arlington (17-16), which has now come within one victory of a trip to the NCAA Tournament in two straight seasons, only to fall short against the same foe.

The game was a rematch of last year's Sun Belt final, albeit in name only because Texas-Arlington had a different coach and five different starters a year ago. Only one current UTA player — reserve D.J. Bryant — even played in the 2018 final.

Texas-Arlington was as close as 64-60 when Warren's jumper went down with 2:10 to go, but the Panthers made enough free throws and grabbed enough defensive rebounds from there on to close the game out comfortably. Georgia State coach Ron Hunter started subbing out starters — and hugging them as they came to the bench — with a minute to go.

But UTA's real downfall was a shooting drought of 23 straight missed field goals spanning the last 10 minutes of the first half and more than the first five minutes of the second before TiAndre Jackson-Young hit a 3 with 14:46 left to trim Georgia State's lead to 43-34.

"That'll get you beat," UTA coach Chris Ogden said. "I knew we were going through droughts and we were trying different things. We had some looks that we didn't hit, but when they made the plays at the rim, I just thought it affected our overall aggression and they did a good job of contesting shots. They did, so give them credit."

Benlevi, a 6-foot-6 senior, was named the tournament's outstanding player after garnering few other accolades during his four-year career.

"Four years I've been playing the Sun Belt and never made All-Conference. I feel like I've been snubbed two years in a row," he said. "So, I'm feeling good."

Texas-Arlington raced to a 12-4 lead as Patrick Mwamba scored seven early points and led 23-19 after Warren's 3 with 10:10 left in the first half. But after that, the Mavericks missed their last 13 shots of the half.

Georgia State surged into the lead for good with a 13-1 run highlighted by Williams' 3 as he was fouled.

"It was very big. I think it was a momentum swinger," Williams said of his four-point play. "After that, I feel like we got the tide rolling and everybody picked up the pace and we started getting the energy flowing ... It was a big-time play."

Texas-Arlington: In its second appearance in the Sun Belt title game since joining the league in 2013-14, UTA again fell short of what would have been its second trip to the NCAA Tournament.

Texas-Arlington: Although the Mavericks were the No. 2 seed in the Sun Belt, finishing just one game above .500 overall likely ends their season without a bid to any postseason invitational tournaments.

Georgia State: The Panthers await their seeding in the NCAA Tournament.