Georgia Tech rallies past North Carolina 72-67 in 2nd half 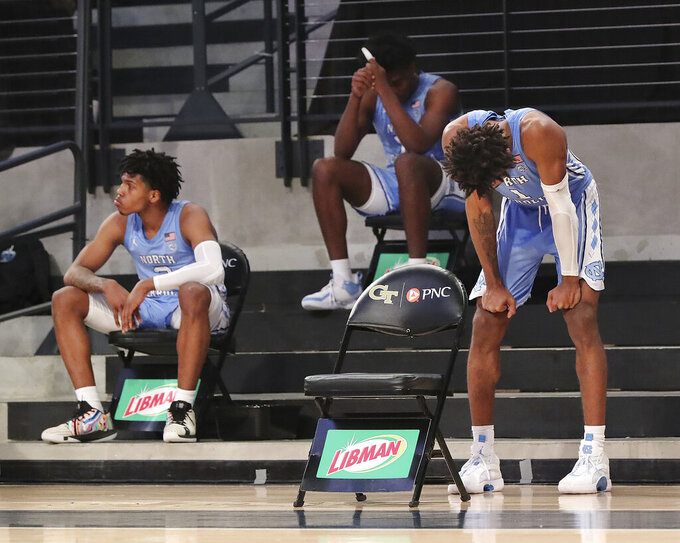 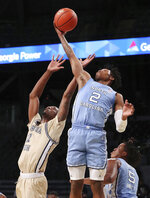 Michael Devoe also scored 20 points in a breakthrough game, hitting four of Georgia Tech's 10 3-point baskets and adding four assists. Devoe had scored a total of 13 points in his previous two games against the Tar Heels.

Alvarado added seven rebounds and seven assists. Hitting one from distance, he's made a 3-pointer in 26 straight games.

The Yellow Jackets (5-3, 1-1 Atlantic Coast Conference) trailed by as many as 11 in the first half and never led until Moses Wright elevated for a scoop on the fast break, taking a bounce pass in stride from Alvarado for a 52-49 lead midway through the second half.

The lead appeared anything but permanent, however, as North Carolina (5-4, 0-2) scored 12 of the next 13 points — including back-to-back 3-pointers from Kerwin Walton — to build a 61-53 lead with under seven minutes to play.

But Georgia Tech outscored the Tar Heels 19-6 down the stretch to claim the win. Bubba Parham scored all nine of his points in the second half, going 3-for-3 from distance, including consecutive 3-pointers in the stretch run. Georgia Tech has won three in a row.

Armando Bacot led North Carolina with 14 points. Leaky Black added 10. The Tar Heels were 43% shooting from the floor (25 of 56) with eight 3-pointers and 18 turnovers that led to 19 Georgia Tech points.

The Yellow Jackets picked up 11 steals and were outrebounded 37-25.

Roy Williams changed his starting lineup for the first time this season, going with Caleb Love, Andrew Platek, Walton, Day'Ron Sharpe and Bacot. Aside from Bacot, the starters provided 27 points on 10-for-25 shooting.

UNC has lost two straight by a total of eight points.

North Carolina's scheduled Saturday game versus Syracuse has been postponed. The Tar Heels play next on Jan. 5 at Miami. Georgia Tech hosts Wake Forest on Sunday.