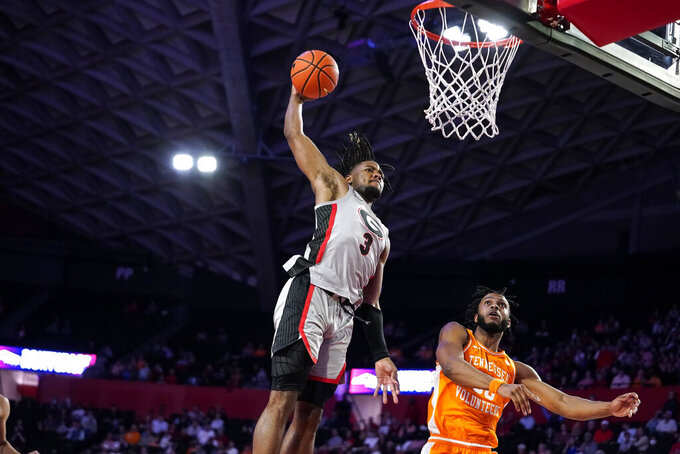 FILE - Georgia's Kario Oquendo (3) goes for a dunk next to Tennessee guard Josiah-Jordan James (30), but misses during the second half of an NCAA college basketball game Tuesday, March 1, 2022, in Athens, Ga. First-year Georgia coach Mike White says he likes the athleticism and competitiveness he has seen in practice. (AP Photo/Brynn Anderson)

Georgia set a school record with 26 losses last season, including the final 12. The Bulldogs finished 6-26 overall and 1-17 in Southeastern Conference games. The one SEC win set another new low for the program, and Tom Crean was fired one day after the season before White was hired from SEC rival Florida.

White said he likes the athleticism and competitiveness he has seen in practice. He said Georgia's roster, led by returning scoring leaders Kario Oquendo and Braelen Bridges, has good depth.

The challenge is learning to win.

“We’ve got a ways to go to figure out how to win at this level, and that is a learned skill,” White said Wednesday at the SEC media day in Birmingham, Alabama. “How do you win at this level? We don’t have many guys on our roster that have consistently won in a big role at high major basketball.”

By comparison, White received a boost when Oquendo and Bridges withdrew from the transfer portal.

“He’s a guy that we’ll challenge daily to lead,” White said of Roberts. “He’s got some leadership capabilities. He’s got some winning characteristics.”

SEC media picked Georgia to finish 13th in the 14-team league. White said he won't try to use that as motivation for his players.

“I’m not into that,” White said. “I’m into the opposite of it, for us to preach as a staff every day about negating external noise and the poison and so on and so forth, running our own race, not worrying about what other people think.”

White said he'd also ignore the predictions if the Bulldogs were picked to finish near the top of the conference.

“Who knows where this team will be competitively in a few months, but I know if we’re focused on preseason rankings, we’re wasting our time,” he said.

Sixth-year player Jailyn Ingram is another key returning player. He averaged 10.7 points and was leading the team with 6 rebounds through nine games last season before suffering a season-ending knee injury. He had surgery to repair his ACL and was granted a waiver by the NCAA for another year of eligibility.

Georgia opens its season at home on Nov. 7 against Western Carolina and will visit Wake Forest on Nov. 11.

The Bulldogs will play at Georgia Tech on Dec. 6 and will face Notre Dame at State Farm Arena in Atlanta on Dec. 18. They open their SEC schedule at home against Auburn on Jan. 4. White will take his Bulldogs to play at his former Florida team on Jan. 7.