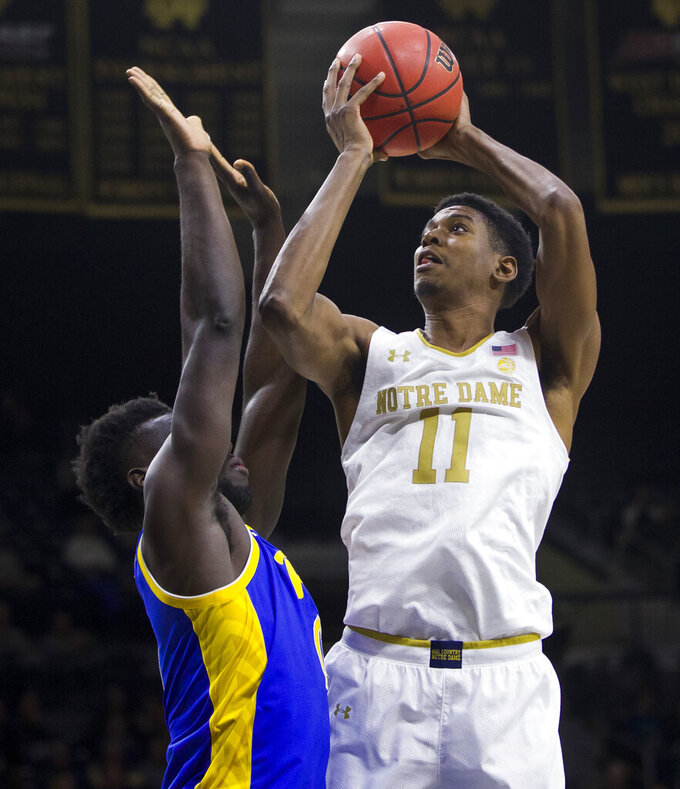 Notre Dame's Juwan Durham (11) goes up for a shot over Pittsburgh's Eric Hamilton during the first half of an NCAA college basketball game Wednesday, Feb. 5, 2020, in South Bend, Ind. (AP Photo/Robert Franklin) 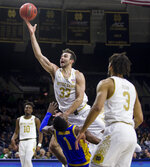 SOUTH BEND, Ind. (AP) — After T.J. Gibbs and John Mooney kept the offense rolling in a third straight home victory, Mike Brey is anxious to see how his Notre Dame team fares in the heart of the Atlantic Coast Conference's Tobacco Road.

“Johnny and the guys talk about February being our month; I'm on the train, too,” Brey said after Gibbs scored a game-high 21 points and Mooney had 17 points and 10 rebounds for his 18th double-double Wednesday in Notre Dame's 80-72 victory over Pittsburgh.

“I think our frame of mind ... how we're playing ... I'm excited about it,” Brey said as Notre Dame (14-8, 5-6 ACC) begins a three-game, seven-day stretch that will take them to Clemson Sunday, Virginia Tuesday and Duke a week from Saturday.

“I don't want to say too much because I don't want to jinx it,” Gibbs said. “It starts on the defensive end. We have to come out with the same energy, the same intensity.”

Mooney scored 17 points and grabbed 10 rebounds, while 6-foot-11 center Juwan Durham had 11 points on 5-for-5 shooting plus three blocks in 19 minutes and Nate Laszewski added 11 points off the bench. The Irish led by as many as 19 points.

“Notre Dame is a really, really good offensive team,” Pittsburgh coach Jeff Capel said of the Irish. “They got into a good rhythm in the first half that gave them separation, and you can't give a team that shoots so well seven 3s in the first half. That's what hurt us."

Prentiss Hubb, who had nine points and seven assists, hit his second 3-pointer of the first half with one second remaining to give Notre Dame a 42-33 halftime lead. Gibbs had 11 points, Laszewski contributed nine and Mooney had eight for the Irish, who shot 14 of 28 from the floor despite enduring a 4:20 drought.

The Irish built the lead to 11 early in the second half. After Pitt drew within 49-44, the Irish went on a 9-0 run over 1:52 with a three-point play by Hubb, two free throws by Dane Goodwin, a dunk by Laszewski and a basket by Goodwin to make it 58-44.

Champagnie ended a 3:13 scoring drought for Pitt, but the Irish led 60-46. After Mooney completed his double-double with his 10th rebound, a Gibbs 3-pointer from the corner gave the Irish a 65-48 lead. A Goodwin jumper made it 69-50 with 7:18 remaining.

Pittsburgh: The Panthers were looking for their second road victory in the ACC but came up empty. After winning at North Carolina 73-65 in early January, Pitt has now dropped road contests at Miami, Syracuse, Duke and Notre Dame. A pair of lengthy scoring droughts – 4:21 in the first half and 3:13 in the second -- doomed the Panthers.

“We have to do a better job minimizing our mistakes, especially on the road,” Capel said after his team had nine turnovers, seven in the first half. “And we have to figure out a way to get some better starts.”

Notre Dame: The Irish, who entered the game averaging just 9.7 turnovers a game, committed eight in the first half but cleaned things up in the second half, making just four more and finishing with 12. The Irish, who led the nation in assist-to-turnover ratio with 1.78, had 19 assists on their 30 baskets.

It was the fifth game of 80 or more points for the Irish, who entered the game averaging 78.2 points per game in the ACC, second only to Duke.

“Their defense bothered us early, but I thought we adjusted and were really poised,” Brey said. “We were confident that offensively they probably couldn't stay with us. A great win and a great home stand and we're within shouting distance."

Pittsburgh: Saturday versus Georgia Tech in the first of two straight home games.