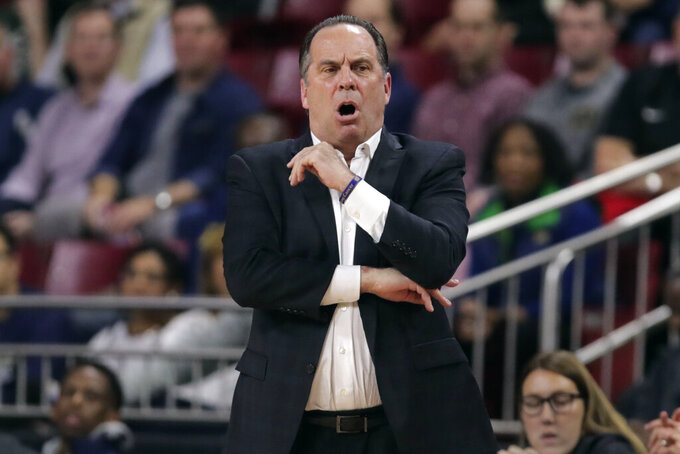 BOSTON (AP) — T.J. Gibbs watched Prentiss Hubb bring the ball down in the final seconds and went to get himself in position for a rebound.

Then the Notre Dame point guard ran into a dead end at the free-throw line.

“He had two guys on him,” Gibbs said. “We had some sort of telepathy, because he saw it immediately. We made eye contact, and he threw it right away. That was all him. I was just in the right spot at the right time.”

Gibbs took the pass from Hubb and flipped in the game-winner with 0.1 seconds left, and John Mooney scored 22 points with 12 rebounds to help Notre Dame beat Boston College 62-61 in an Ash Wednesday matchup of the longtime Catholic school rivals.

“It was a broken play,” BC coach Jim Christian said. “They made a great play. They made a shot.”

BC led by as many as 10 points in the first half and had the lead with 8 seconds remaining when Jay Heath made a scoop shot over Mooney from the lane — one of five lead changes in the final four minutes.

Notre Dame coach Mike Brey has a rule that with more than four seconds left, his team is supposed to push the ball up court without calling a timeout.

Hubb did just that, and then had the good sense not to force a bad shot against two defenders.

"Hubb did a great job of not shooting a crazy one right there and pivoted one more time. A lot of times the defense is in a little bit of a panic mode,” Brey said. “I loved our poise.”

Steffon Mitchell had 12 points, 11 rebounds and nine assists for BC.

The Eagles led by as many as 10 points in the first half and still held a 55-49 edge with eight minutes left before Nate Laszewski made a 3-pointer and then a layup to make it a one-point game. It was 57-54 when Mooney made one of two free throws and then, after two misses at the BC end, Hubb hit a 3-pointer to give the Irish their first lead of the half.

The Irish led 60-59 when BC's Julian Rishwain dove to the floor to grab a loose ball; he was tied up, but the possession arrow gave the ball to the Eagles and Heath gave BC the lead.

BC scored 10 straight points late in the first half to turn a tie game into a 37-27 lead.

The Eagles still led by 10 when they tried to inbound the ball near midcourt with 1.6 seconds left in the half. But the pass was picked off by Rex Pflueger, who took a step, hopped from behind the half-court line and banked in a basket at the buzzer to make it 41-34.

“That’s a new play we run, where we steal the ball and throw it in from half court off the backboard. That worked,” Brey said with a chuckle. “When you see something like that happen, you do think the basketball gods are with you.”

Brey called Pfleuger a “bright lights guy,” who also had a tip-in with 1.5 seconds left to beat Stephen F. Austin and reach the Sweet 16 of the NCAA tournament.

This time, it was the first thing Notre Dame had to cheer for.

“They're crushing us. We were holding on for dear life,” Brey said. “He makes winning, smart basketball plays. That's a huge play. You're down seven but you feel like you're tied, mentally.”

It was 45-36 when the Irish ran off seven points in a row and eventually made it a one-point game.

Notre Dame: The Irish started 2-5 in the ACC and are now above .500 as they make a case for the NCAA tournament.

Boston College: The Eagles had lost 13 in a row to the Irish before winning 73-72 in South Bend on Dec. 7. BC was without Jairus Hamilton and lost CJ Felder to a chest injury in the first half. The Eagles are guaranteed a losing record in the ACC for a ninth straight season.