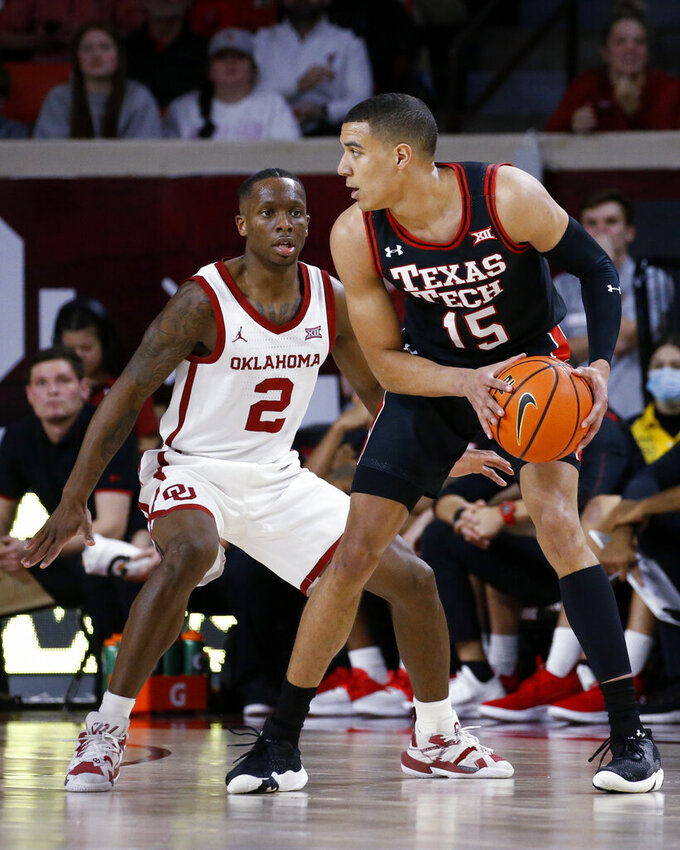 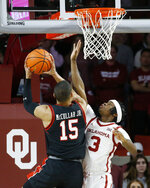 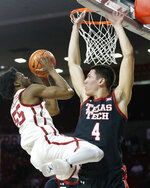 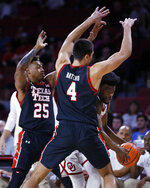 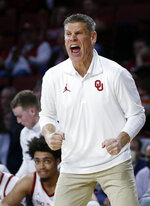 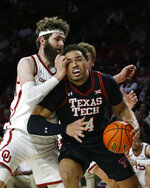 Elijah Harkless added 13 points and Jordan Goldwire had 10 for Oklahoma in the first of two meetings between the teams this season.

Gibson’s long-range shooting sparked the Sooners early. The transfer from North Texas had 13 points by halftime, but Oklahoma still trailed by five going into the locker room.

The Sooners started fast out of the break, using an 11-5 run in the first four minutes of the second half to take back the lead, which they never lost.

“I think Texas Tech’s one of the best teams in the country, I really do,” said Oklahoma coach Porter Moser. “It gave our guys confidence that we can play 40 minutes and win. I thought we had our best game of playing 40 minutes in a long time.”

The Red Raiders scored more than half their points in the paint but lacked the pace on offense to maintain their advantage, shooting just 2 of 17 from 3-point territory.

“We were chasing them the whole second half,” Texas Tech coach Mark Adams said. “That’s not the way (we) like to play, but you've got to give all the credit to Oklahoma. It was a tale of two halves.”

The Sooners scored 45 points in the second half to win their first game against the Red Raiders since Feb. 25, 2020, and claim the program’s fourth victory over a ranked team this season.

“It’s huge,” Moser said. “And that’s what I kept saying is we’ve got to stay positive. It’s literally the most elite schedule night in and night out, playing in the Big 12. We also had Auburn, so we’re playing elite teams.

“Just stay with it. Every game’s an opportunity. Put this one in the bank, we’ve got to get another one.”

Texas Tech: The Red Raiders missed an opportunity to better their Big 12 regular-season championship odds after first-place Kansas lost at Texas on Monday. The Red Raiders are tied with Texas for third, 1 1/2 games behind the Jayhawks.

Oklahoma: It was a big win for the Sooners’ NCAA Tournament hopes. They entered with a NET ranking of 48 and can improve their resume with three ranked opponents on deck in the next four games.

Oklahoma guard Bijan Cortes (concussion) missed the game and is doubtful for Saturday at No. 8 Kansas, Moser said.

Gibson on his offensive performance: “Any time you can go for 30 points in college, in the Big 12, that says a lot. I’m just extremely blessed.”

Oklahoma: Plays at No. 8 Kansas on Saturday.