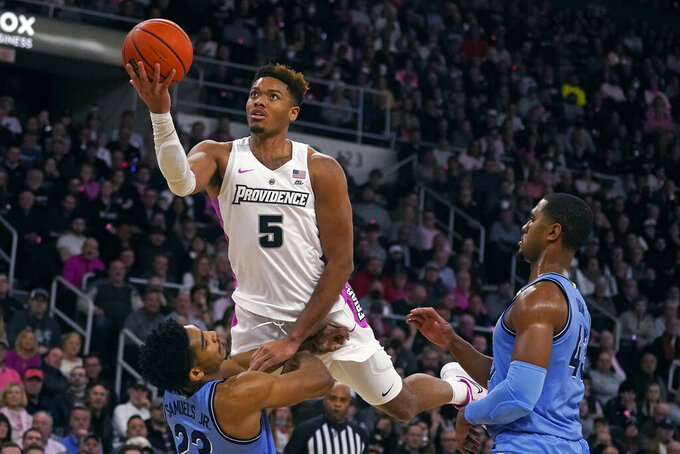 Providence forward Ed Croswell (5) collides with Villanova forward Jermaine Samuels (23) on a drive to the basket during the first half of an NCAA college basketball game in Providence, R.I., Tuesday, Feb. 15, 2022. (AP Photo/Charles Krupa) 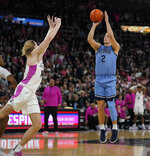 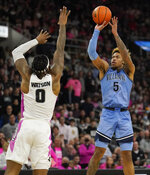 It didn't keep him from playing his best game of the season.

Gillespie had five 3-pointers and a career-high 33 points, including a key 3 with 23 seconds left, and 10th-ranked Villanova held on to beat the eighth-ranked Friars 89-84 on Tuesday night.

The loss snapped the eight-game win streak by the conference-leading Friars (21-3, 11-2). It was their first home conference loss of the season.

Villanova never trailed in the second half, but Providence cut it to 82-80 with 50 seconds left on a driving layup by Al Durham.

The Wildcats raced back up the floor and spread the Friars' defense. The ball eventually found its way to a wide-open Gillespie, and he calmly knocked down his fifth 3 of the game. Durham missed at the other end and Villanova was able to close the game out at the free throw line.

“We’ve been through that situation so many times. … I was really just going to read it and make the right play," Gillespie said. "I had the open shot and I took it.”

Moore and Gillespie — the Wildcats’ two scorers — were productive despite playing in just their fourth and third games, respectively, since suffering ankle sprains.

“It looked like he had seven legs today,” Providence coach Ed Cooley said of Gillespie.

Villanova coach Jay Wright said their leadership has helped get the Wildcats through a tough stretch, which included a narrow win over Seton Hall on Saturday.

“These kids in this league are so tough,” Wright said. “They don't sit out. (Gillespie and Moore) are hurt. They're not practicing. Their ankles are swollen. ... I'm really proud of these two.”

Nate Watson led Providence with 20 points. Jared Bynum added 18 points and A.J. Reeves finished with 16 after being saddled with foul trouble in the first half. But the Friars couldn't keep pace with Villanova from the outside, going just 5 of 23 from 3 and 19 of 27 from the free throw line.

“Some days it’s just not your night," Cooley said.

The Wildcats will host the final regular-season meeting between the teams on March 1.

Villanova took a 46-39 lead into the half as Moore and Gillespie — the Wildcats’ two scorers — continued to be productive despite playing in just their fourth and third games, respectively, since suffering ankle sprains.

The Wildcats hit three of their first four 3-point attempts and jumped out to a 13-6 lead. Moore had four 3s and 18 points in the opening 20 minutes, taking advantage of poor transition defense by the Friars to find open spots on the court.

Gillespie started slow, but had a pair of 3s and 10 points in the half.

Providence stayed in it despite going just 3 for 12 from beyond the arc and playing most of the half without Reeves after he was whistled for his second foul less than two minutes into the game. He returned at the 10:54 mark, but played only in short bursts the rest of the period.

Fellow starter Justin Minaya joined him with two fouls with just over five minutes to play in the half.

But the Friars got a lift from their bench, which outscored their Wildcats counterparts 16-2.

This was a big win for the Wildcats, who entered the game just 5-4 against ranked opponents. It also keeps them in the hunt to win the regular-season conference title.

Look for the Wildcats to leapfrog the Friars in the polls, but Providence won’t fall too far having played some of the best basketball in the Big East to this point.

Villanova: Gets a three-day break before hosting Georgetown on Saturday.

Providence: Has four days to recharge before visiting Butler on Sunday.