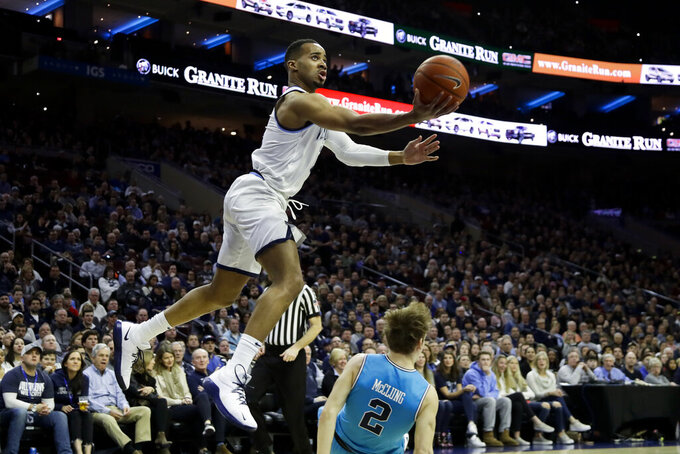 Villanova's Phil Booth, left, goes up for a shot over Georgetown's Mac McClung during the first half of an NCAA college basketball game, Sunday, Feb. 3, 2019, in Philadelphia. (AP Photo/Matt Slocum) 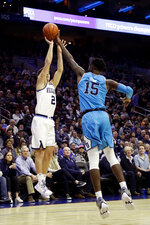 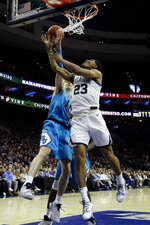 PHILADELPHIA (AP) — Villanova had reminders everywhere of how just successful it's been in recent seasons: two national championship trophies were displayed for photo ops and former great Jalen Brunson was honored in a pregame ceremony.

Collin Gillespie and Jermaine Samuels gave the Wildcats a glimpse of just how great the future could be for the program.

Gillespie hit six 3-pointers and scored a career-high 30 points, Samuels had 16 rebounds and Eric Paschall had 24 points to keep No. 14 Villanova unbeaten in the Big East with a 77-65 victory over Georgetown on Sunday.

"I want to see how far we can take this ride," coach Jay Wright said.

The Wildcats got rolling late at their off-campus home, the Wells Fargo Center, where they are 32-3 since 2012-13 — and their win percentage boosted by six straight wins over the Hoyas in Philadelphia.

Phil Booth — who missed 10 of his first 12 shots — scored on a driving layup, then buried a 3 to snap a tie and give Villanova a 58-53 lead with 5:41 left. Villanova, which was called for four fouls on one possession late in the game, got a Gillespie bucket to stretch the lead and hold off the Hoyas.

The Wildcats were again a two-scorer show. Booth, who was leading Villanova this season with 18.7 points, mostly sat this one out until crunch time. He missed his first six 3-pointers while Paschall had some surprising help from Gillespie.

After Paschal converted a three-point play to give the Wildcats a 46-43 lead, he had combined with Gillespie to score 39 of their points. Gillespie, a 6-foot-3 sophomore guard, had flashes of scoring bursts this season. He scored a career-high 21 in a loss to Penn and 19 in a loss to Furman. But in a Big East battle, Gillespie was clutch in a win.

Gillespie made 6 of 11 3s and was 10 of 12 from the free-throw line to show he can be a scoring factor when needed in the stretch run.

"We just gave him too much airspace and he was able to knock down all those 3s," Georgetown coach Patrick Ewing said.

Gillespie sank two free throws for a three-point lead to cap one of the wilder sequences of the game: Booth was picked clean by Greg Malinowksi and the Hoya guard went for a fast-break layup. But Samuels hustled back and stuffed Malinowksi on a block that brought the crowd to its feet. The Wildcats snagged the possession and Gillespie converted from the line.

"It was my habit to go chase that down," Samuels said. "That's what we do for each other, we make up for each other. That gets us fired up."

James Akinjo led the Hoyas (14-8, 4-5) with 19 points. The Hoyas had averaged 83.2 points on the season yet scored no field goals over a 6-minute stretch late in the game.

"I thought we started hunting shots," Ewing said. "Guys are open, we've got to make the right plays."

Georgetown: The Hoyas had won two straight games but again had their Big East progress stunted by Villanova. The Wildcats have been a thorn for Ewing since the 1980s. The Wildcats upset Ewing and the Hoyas in the 1985 national championship game.

Villanova: The Wildcats are playing for NCAA Tournament seeding and could earn one in the low single digits, a surprising turnaround a team with four losses in early December and had fallen out of the AP Top 25.

"These guys have come a long way but we know how fragile it is," Wright said.

Brunson, the 2018 AP Player of the Year, returned for a senior day celebration. Brunson won two national championships in three seasons with the Wildcats and was drafted by the Dallas Mavericks. He received a framed No. 1 jersey and shared a hug before the game Wright. Brunson said he still keeps in touch with many of his teammates. "It was a flashback in about 30 seconds," he said. Wright called him "a real legend" in the program."

The Wildcats host Creighton on Wednesday.