A glance at Duke's Mike Krzyzewski's influence on basketball 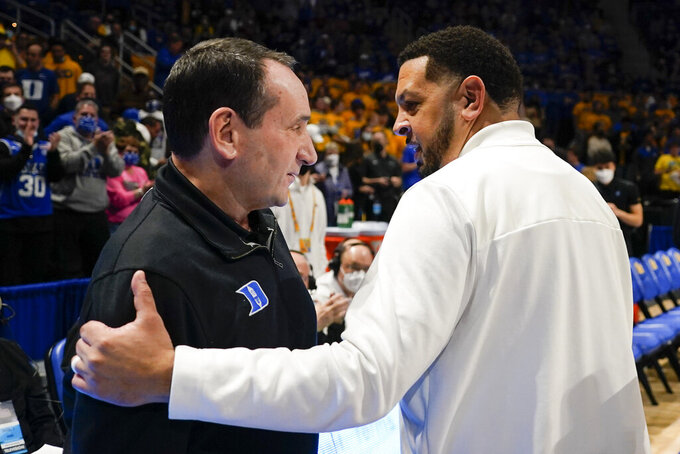 With retiring Hall of Fame coach Mike Krzyzewski down to his final few games at Duke, here’s a look at his impact on the game, from college basketball coaches, to the NBA and international competition:

That list doesn't include former assistant Mike Brey, who is in his 22nd season as Notre Dame’s head coach, or former Duke director of basketball operations Mike Schrage, in his third season at Elon.

In all, 68 of Krzyzewski’s players at Duke have gone on to become NBA draft picks, including record totals of 42 first-round draft picks and 28 going in the lottery.

There are 21 former Krzyzewski players as of February on NBA rosters — including current or former All-Stars Irving, Williamson, Jayson Tatum and Brandon Ingram – and an ACC-record 27 players last season.

Utah Jazz head coach Quin Snyder; Elton Brand as the general manager of the Philadelphia 76ers; Trajan Langdon as GM of the New Orleans Pelicans; Grant Hill as co-owner of the Atlanta Hawks; Mike Dunleavy Jr. as vice president of basketball operations for the Golden State Warriors; David Henderson as a scout for the Cleveland Cavaliers; and Martynas Pocius as an assistant director of pro personnel for the Denver Nuggets.

Duke notes that Krzyzewski has coached 113 NBA players between his time at the school and his tenure with USA Basketball.